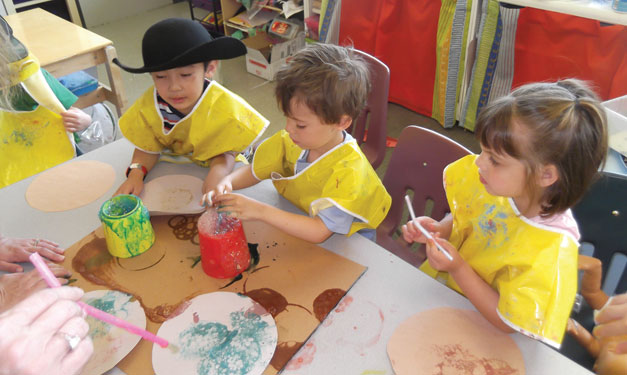 The kids at Walnut Lake Preschool and Developmental Kindergarten in West Bloomfield draw pictures and read storybooks in the classroom just as kids at most schools do.

Yet the preschoolers and kindergarteners at Walnut Lake deal with different challenges most students their age don't have.

"Kids come to us for all kinds of reasons," Rozenberg says. "Sometimes, kids just march to the beat of a different drummer."

The school is a program through the Michigan Psychoanalytic Foundation, a nonprofit. It is also one of 11 preschools in the Alliance of Psychoanalytical Schools, notes Dr. Nancy Blieden, clinical co-director at the school along with Don Spivak.

Walnut Lake works with a network of local therapists, psychologists and pediatricians who volunteer time as personal family consultants and observe each student in the classroom.

"It's a community of minds developing the child's mind," Blieden says of the school.

In a classroom exceeding no more than seven students, the students learn science and writing, for example, but also how to cope and overcome their individual challenges, Rozenberg says.

The school opened in January 2009 thanks to a donation from the Estate of the Stanley and Catherine Ellias Foundation. The donation supported the program for its first two years, Blieden says.

As of September 2012, about 50 kids have come through the school, which recently received a grant from the Children's Psychological Health Center in San Francisco, she says.

"We had no idea that the school would be so successful," Blieden says, adding that there has been "so much community support for it."

Rozenberg says "there's nothing better" than seeing the kids accomplish the school's goal and transition into a regular classroom. But, she adds, "Sometimes it's the little achievements that might seem so minor to someone else that really become miraculous here."