Local mom and organizer offers her tips on organizing all your toddler's stuff and keeping it that way. 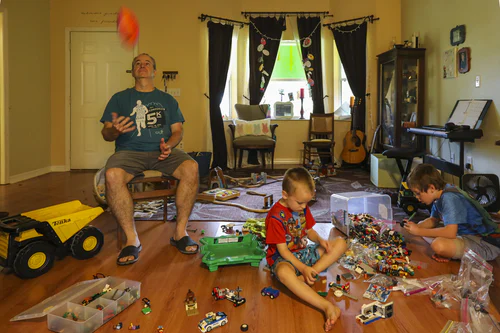 Violetta Reum’s pregnancy was such an easy one that she figured she and husband Micah would continue doing the same things they did before baby Dominik arrived.

“I just felt like … I’m going to have the same amount of time and I’ll just figure it out. I’m so organized, I’m so active,” she says she remembers thinking. “Then he came. And life was absolutely and totally different.”

Rather than fight to hold on to her old life, she says she embraced parenting with intention. “As much as you think that you can make your life be the same, it just won’t be. And it’s OK, and it’s a good thing.”

Now at 18 months, Dominik is now very much in the throes of toddlerhood, says the Royal Oak mom who was born in Ukraine and met Micah at college.

“I think my favorite thing is just watching him grow and discover. I think every day he either learns a new word or a new skill or climbs a new piece of furniture or figures out a new puzzle,” she says, adding the couple decided early on to let Dominik lead his growth and learning.

Earlier this year, they started their own business this year, Reum Consulting, to be more fully present for him while helping other moms and dads do the same. “I have a huge heart for moms and especially for moms who are spinning a hundred plates in the air,” she says

Her best three tips to wrangle all the stuff of toddlerhood: