How to Talk to Your Kids About Dating

A parent's guide to when to have the dating talk and what you should say, including tips from two local experts. 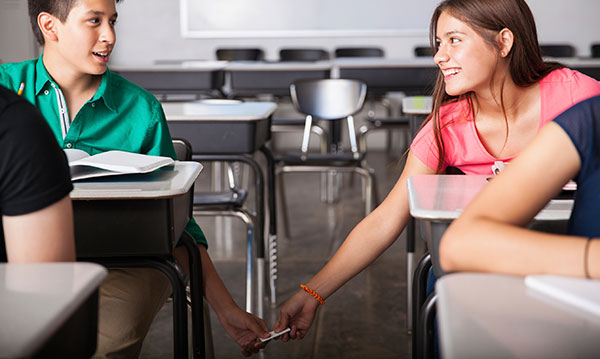 Is your teen thinking about dating?

Whether you overhear your daughter talking about a crush or your son is getting ready to ask a date to a school dance for the first time, it might be a good opportunity to have the “dating talk.”

As much as parents may prefer to avoid the topic, dating is an issue that most moms and dads of teens will need to address eventually. Here are some tips for approaching the topic and some key messages to communicate. Plus, find additional tips on how to get your teen to open up in conversation.

Parents should keep in mind that these tips are for in-person relationships. Online dating is increasingly common among teens, experts say, and presents issues and dangers of its own – get more information here.

Ideally, conversations about dating will evolve naturally from the ongoing discussions about relationships that you’ll have with your kids from an early age.

“I see dating as a conversation that starts early and it keeps building – parents keep adding building blocks on that conversation according to the child’s developmental, stage, age and needs,” says Dr. Georgia Michalopoulou, chief of child psychiatry and psychology at the Children’s Hospital of Michigan in Detroit.

Keep in mind that intimate relationships actually start early in life with the development of friendships.

Talk to their level

Dating might have a different definition depending on your adolescent’s age and maturity level, so base your advice on your son or daughter’s current needs.

“Tailor the conversation and the depth based on the maturity level and level of interest of the child,” says Leslie Johnsen, clinical director and director of adolescent services at Perspectives Counseling Center in Troy.

For example, she says, a 9-year-old who says she’s “dating” a boy at school might just mean that she waves to him on the playground at recess.

Instead of overwhelming your child with information, start with an open-ended question like, “What does dating mean to you?” and see where the conversation goes.

Asking questions also makes the talk a dialogue instead of a lecture.

“We always want to follow their lead,” Michalopoulou says.

The same dating rules apply for girls and boys, including teaching that “no means no.”

Depending on the teen’s age, parents will also need to discuss sex, sexually transmitted diseases, the potential for sexual assault and the importance of mutual respect.

Teens should also be taught about relationship “red flags” to watch out for, such as controlling or jealous behaviors, and signs of abuse.

“Along with teaching them about healthy relationships, the opposite side of that coin is to help them recognize what abusive relationships might look like,” Michalopoulou says.

Talk to your teens about situations that may present a risk and how they can avoid those situations or get out of them if the need arises, Michalopoulou says.

“It’s very difficult to make decisions on your feet when the situation presents itself,” she says.

Parents can help their teenagers define boundaries for themselves and offer ideas to help implement them, such as a code word to text to a parent if the teen wants to be picked up or wants a phone call telling them to come home, Johnsen says.

A discussion on dating is also the time to explain your expectations, including curfews and rules such as knowing who your teen is with and where they’ll be at all times.

Despite their resistance, Johnsen says she has found in her years of working with teenagers that they do need – and often want – boundaries from their parents.

Be prepared for breakups

Most teen relationships are relatively brief and, of course, end in breakup. Parents should be prepared to be empathetic and help their teen work through their emotions, keeping in mind that they might not get all the details on what happened.

Be prepared to listen to your teen and validate the feelings they’re experiencing, Johnsen advises.

“We can’t validate an adolescent if we don’t listen. We can’t understand and empathize if we don’t listen,” she says. “Not only listen to them but believe what they’re saying. Believe the tears, believe the pain. If a teenager can feel validated, that’s half the battle.”

Parents should understand that emotions are “very, very intense” during the adolescent years, Michalopoulou says.

“The rejection can be overwhelming. It can feel like it’s the end of their life, the end of the world,” she says. “It is important for the parent to meet the child at that moment where they are.”

Know when to seek help

If your teen is seriously struggling with a breakup or a case of unrequited love, know when it’s time to seek professional help. Depression is common among teens and can be serious, so consult a psychologist who specializes in adolescents if you feel your teen may need additional support. Teen support centers can also be a helpful resource.

Do you have any advice to add about talking to teenagers about dating? Tell us in the comments section below.