Is Your Family Addicted to Social Media?

Being too connected could be a mental health problem for you and your crew. Here’s how to tell if your family is addicted to social media — and how to reset. 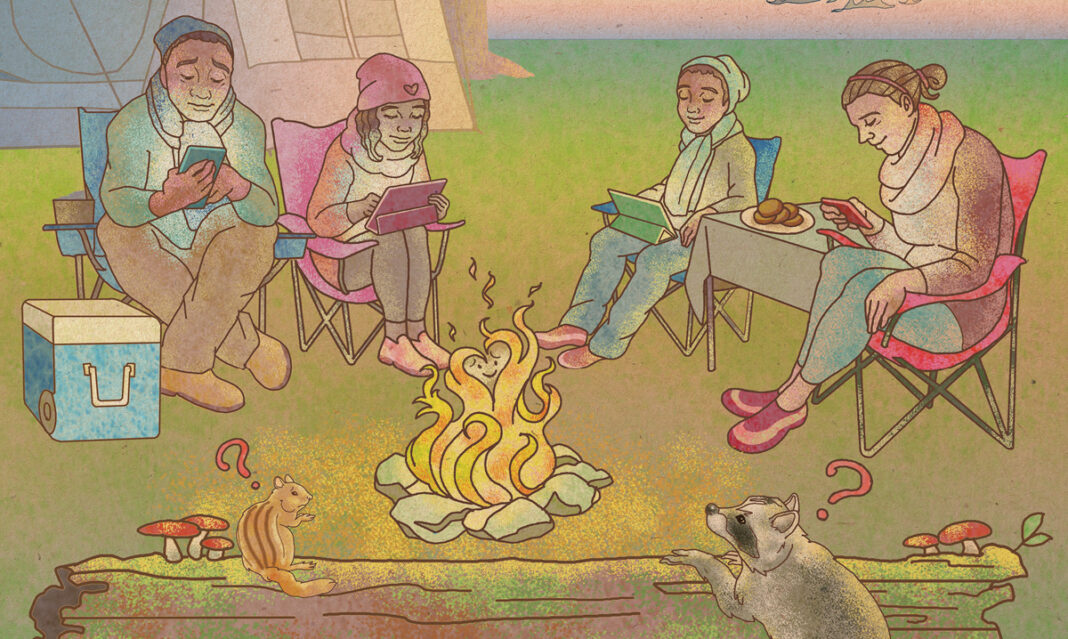 Facebook, Instagram, Snapchat, Twitter, YouTube and more. Social media has exploded over the last decade and 7 in 10 Americans are using it, according to the Pew Research Institute. There are pros and cons to these platforms, but there’s one big issue that results from social media use: social media addiction.

If you’re scrolling on screens at the dinner table, communicating more with people on the internet than those in front of you and not able to put down your phone for longer than a few minutes, you might be addicted to social media.

“Social media addiction is a behavioral addiction that is characterized as being overly concerned about social media, driven by an uncontrollable urge to log on to or use social media, and devoting so much time and effort to social media that it impairs other important life areas,” notes the Addiction Center, adding that it impacts 5-10% of Americans.

Kendra Hathaway, a licensed marriage and family therapist says she’s all too familiar with social media addiction in the families she sees at Positive Transformations in Utica, and Sollars and Associates, where she contracts her services.

“It definitely creates issues within the family because as we see now since everybody is using social media, it stops the communication,” Hathaway says.

Years ago, Hathaway notes, family dinners were promoted as a way to keep the lines of communication open, but that since dwindled. Too many of us are plugged in and not connecting with our family members. So, what can we do about it? First, look at the signs.

Why are we addicted to social media?

Social media on smartphones in particular, according to research from Harvard, activates the reward centers in the brain by involving dopamine, a chemical that creates feelings of pleasure. That’s where addiction comes in. Now you have a dependence on social media because it creates these feelings of pleasure, Hathaway says, when you feel seen or recognized by others on the different platforms you use. Young people are waiting for that validation and those “likes” and comments, she adds. The same goes for moms and dads, too.

And it’s changed the way we interact with everyone.

“We are taking our normal conversation and our normal interactions and we’re turning it inward,” she says, expecting people we don’t know to give us attention.

Keep an eye out for their inability to stop and stay away from social media. Are they mad because they can’t have their phone for dinnertime or are they OK?

Look for decreased socialization. If your child is abandoning their commitments and doesn’t want to talk to anyone because they’d rather be online, it’s an issue.

Putting down the phone

Some families may opt for a social media detox, but if that’s too extreme for you and your family right now, there are some things you can do to curb the dependence on social media.

Turn off those notifications, Hathaway suggests. Limit your usage and unfollow any guilty pleasure pages — this should be done for parents and children.

“One thing that parents have to constantly do is keep those doors of communication open,” Hathaway says, and there are ways to do just that such as setting up a weekly game night for the family to connect. Make the activity mandatory, she adds.

Set aside time when there are no phones, such as dinnertime and during that mandatory game night or family outing.

“We, as parents, have to take the lead,” she says, in showing our children how to interact effectively without phones.

Brought to you by Ethel & James Flinn Foundation. Find more information at flinnfoundation.org.