Hot Cars & Kids: What You Should Know

It may often be an accident, but leaving a child in a hot car for even minutes could be deadly. Learn how to ensure it never happens in your family. 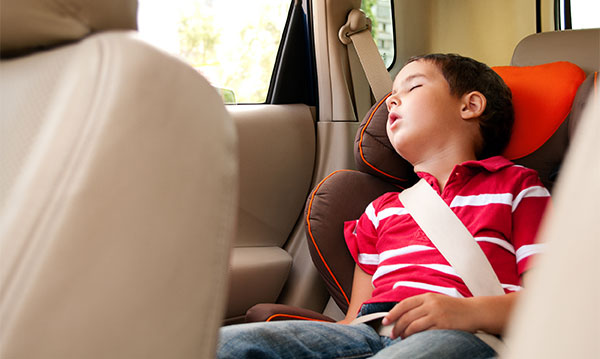 Each summer, the headlines address a sad, preventable tragedy: kids dying because they were left in hot cars.

Last year, 24 kids in the United States died due to heat stroke in such a tragedy, and already this year, that number has reached 19, says Renee Zarr, Injury Prevention Education Coordinator with the Kohl’s Injury Prevention Program at Children’s Hospital of Michigan in Detroit. But, she says, the near misses – the times children are rescued and survive – aren’t documented.

“They fall asleep and it slips your mind,” she says of a common accidental scenario. Maybe, it’s due to a schedule change. That precious baby gets quiet, dozes off and, without realizing it, mom or dad are in their routine, driving to work or running an errand, forgetting to drop baby at daycare on the way. “It’s extremely tragic,” she says.

Luckily, there haven’t been any deaths in Michigan so far this year from such an incident – and hopefully it will stay that way. Zarr explains what happens when a child is left in a car during these hot days, how you can prevent an accident and what you should do if you see a child left in a car.

When a child is left in a hot car, “more than half of them are accidental,” Zarr says. “There is probably about a third of them that are ‘intentional,’ as they say” – running into the store and leaving the baby in the car thinking it will be just a few minutes, for instance.

But in the first 10 minutes of turning off the engine, “the internal temperature of your car increases over 20 degrees,” Zarr stresses. So, if it’s 80 degrees outside, the car will be 100 degrees within minutes.

The dark interior of the car attracts the heat, and the heat can’t escape from the car. Now imagine baby, strapped into a car seat and completely helpless. Zarr points out a little one’s body temperature rises three-to-five times faster than an adults. When that child’s internal body temperature reaches 104 degrees, “that’s when heat stroke starts to kick in.” Hyperthermia can become fatal once the body’s core hits 107 degrees.

The horrific situation is avoidable, though. Zarr says her team is encouraging parents to set a reminder for themselves to avoid accidentally leaving kids behind. “One thing that I do when I get in my car: I put my work bag in the back seat and that way, it forces me, when I get to work, to look in the back seat,” notes Zarr, who’s also a mom.

The item you put in the back seat could be a workbag, work badge, phone or purse – anything that will prompt you to open the back doors and physically look. Or, put a teddy bear in the front passenger seat or put a Post-It note on your steering wheel if there’s a child in the back seat.

Technology can be great, and now there are select car seats and cars that will alert drivers that a baby is in the back seat. “But I don’t want parents to have that false sense of security with technology,” Zarr says. “I want you to see with your own eyes to have your own peace of mind.”

For more child safety information and a wealth of resources, visit the Kohl’s Injury Prevention Program at Children’s Hospital of Michigan on the web at childrensdmc.org/KIPP.