Pediatric ER vs. General ER: How Do They Compare?

The choice might make all the difference. Why? Children's Hospital of Michigan highlights the advantages of a pediatric-specific emergency department. 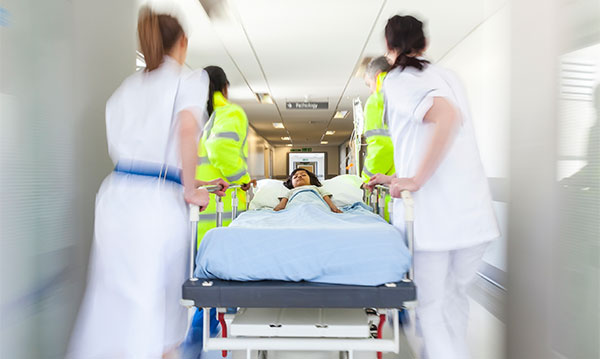 In the case of an emergency, finding the nearest emergency room is naturally the top priority. But what about when it’s your child? Surprisingly, the general ER down the street might not be the best option in these moments when every second counts.

“We see that scenario dozens of times a day, where families bring their children to general emergency departments and what happens is many of those children are transferred to us,” says Dr. Curt Stankovic, medical director of Pediatric Emergency Medicine at Children’s Hospital of Michigan in Detroit. It can sometimes cost hours – and money in transfer fees. “That’s a huge inconvenience.”

He emphasizes that a pediatric emergency department is vastly different from a general ED in a number of ways, which is much to the benefit of its little patients – and why many kids end up relocated to these kid-focused hospitals.

“I think one of the main reasons to bring your child to a children’s hospitals instead of a general emergency department is safety,” he says.

The expertise of the physicians is a large distinction between the two options. Pediatric facilities are full of pediatricians who have gone through three years of pediatric training, and three additional years of pediatric emergency training. “From a patient’s point of view, they don’t really see that difference. What they do see, though, is the nursing,” Stankovic says. “Everything they do is related to children. They’re trained in children, they’re trained to recognize sick kids. They’re better at caring for kids.”

Another reason to go pediatric? Children are complex, varying in weight and size, meaning dosage calculations are more complicated. Doctors at children’s hospitals regularly figure these calculations, he says. Plus, in a general ED, the standard equipment isn’t always designed for pediatric patients, who are obviously smaller than adults.

“You want that care to be safe and of high quality and that’s what we’re used to,” Stankovic says.

At CHM, parents and kids will notice a major difference in environment alone. From the colors on the walls to the child life experts who are pros at distracting and comforting kids in painful or scary situations, kids are put at ease by the surroundings.

He adds that true children’s hospitals are usually in academic centers, which is the case with CHM in Detroit, located in Midtown near Wayne State University. “We’re at the cutting edge of providing evidence care, which means providing the right care.” In addition, CHM happens to be one of the nation’s leading centers for pediatric emergency research, Stankovic notes.

Soon, CHM-quality care will expand to even more of southeast Michigan. Not only can families find a pediatric emergency department at CHM in Detroit, but there will also be another CHM emergency location opening in Troy in early 2016.

The extra 15 minutes driving to a specialized ED might save hours in the long run. “If your child is sick, meaning not like a typical bump or bruise, all of those patients will be transferred to higher level of care,” Stankovic says. “Time matters when your child’s really sick.”

To learn more about Children’s Hospital of Michigan’s emergency department, visit childrensdmc.org/pediatric-emergency-department-ed. In the event of an emergency, please call 911.

When you level-set your expectations, you put yourself on a path for setting goals that are satisfying and achievable, says Jamie McGillivary at Healing Haven.
Read more
School Issues