Why Postpartum Depression Shouldn’t Be Ignored

Find out the signs of postpartum depression and what mothers, fathers and their families should know about getting help. 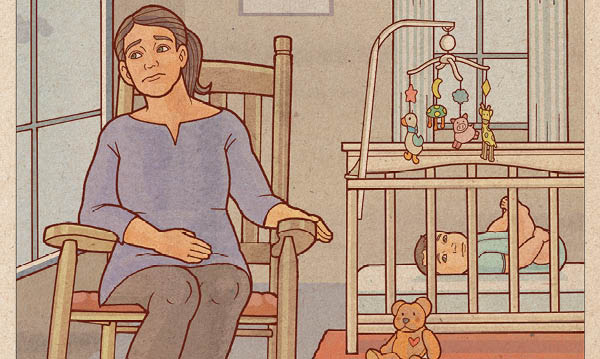 Much is said about the joys of having a new baby.

In fact, expectant moms are likely to hear about the sweet moments to come long before they even experience them: seeing baby’s first smile, hearing his first laugh and cuddling for hours on end. “Enjoy every moment,” women are often told.

But the more trying parts of being a new parent aren’t as commonly discussed, which can make it difficult for moms to seek help when they’re feeling symptoms of depression. About one in nine women will experience postpartum depression, the Centers for Disease Control and Prevention reports.

“Having a baby is probably the greatest thing in life,” says Dr. Mark Werner, M.D., an OB-GYN at Beaumont Hospital in Royal Oak. So when women feel sad instead of overjoyed, “they feel like they don’t want to say anything because they’re supposed to be happy.”

It’s more common than you’d think, Werner says, with almost all new mothers perhaps affected to some degree by either the short-term “baby blues” or actual postpartum depression.

The prevalence isn’t surprising, considering the hormonal changes women face along with the sudden lack of sleep, loss of routine, lifestyle changes and, in some cases, financial concerns.

“The routine is definitely broken after having a baby. And you just had surgery – even a vaginal delivery, to me that’s like major surgery,” Werner says. “The recovery is a lot.”

Symptoms of postpartum depression can include sadness, crying more than usual, excessive worry, lethargy, changes in eating or sleeping habits and withdrawing from other people or usual activities. It’s more likely to affect teenage mothers and those who don’t have an adequate support system.

“People are at risk if they don’t have help,” Werner says. But he points out that anyone can get postpartum depression, no matter their circumstances. “It can happen to anybody. Anybody.”

“After babies are born, unfortunately, moms don’t get back in to the doctor until about six weeks after birth. There’s a chance of kind of missing something until that,” she says. “There’s been some push to get pediatricians to do screening, since the baby is usually at the pediatrician more often than that.”

Postpartum depression, which includes symptoms that last more than two weeks, can start during pregnancy or develop within 12 months of childbirth. Parents should also be aware of the more rare postpartum psychosis, which involves auditory or visual hallucinations and is considered a psychiatric emergency.

“As a society we have certain expectations of moms. We kind of expect new moms to be happy, and the birth of a baby is seen as this joyous event,” says Lawson, who serves as a coordinator for Postpartum Support International. “The reality is it’s really hard for anyone to have a baby and get used to those changes.”

Fortunately, treatments are available and very effective, she says. These include a range of talk therapy options as well as medications, many of which are considered safe to take while breast-feeding.

“It’s definitely very treatable,” Lawson says. “Most moms, if they seek treatment and stick with it, will feel better – whether that’s just through therapy or a combination of therapy and medication.”

Many people are surprised to learn that dads can be affected by postpartum depression, too.

“The most recent research is showing that up to 10 percent of new dads also experience some symptoms of postpartum depression or anxiety,” Lawson explains. “Just like moms, dads are an important source of support for the family, and it’s important for dads to bond with their kids as well as it is for moms.”

Anyone who isn’t sure whether they’re facing postpartum depression or simply overwhelmed by the new tasks of caring for a baby should see a health care provider. Addressing any sleep deprivation is an important step, Lawson points out.

“Sometimes that’s enough and it’s not really diagnosable depression,” she says. “Other times, it’s more than that.”

It’s best to seek treatment for postpartum depression as quickly as possible, since symptoms are likely to continue or even get worse if not addressed. Women should know there’s no shame in asking for help.

“It can affect the relationship between mom and the baby and really the whole family,” Lawson says. “Moms who feel better do a better job parenting and the whole family as a whole functions better.”