The gap for minority communities receiving quality mental health care has been long-known but current events make it more critical to address. Here's what needs to be done. 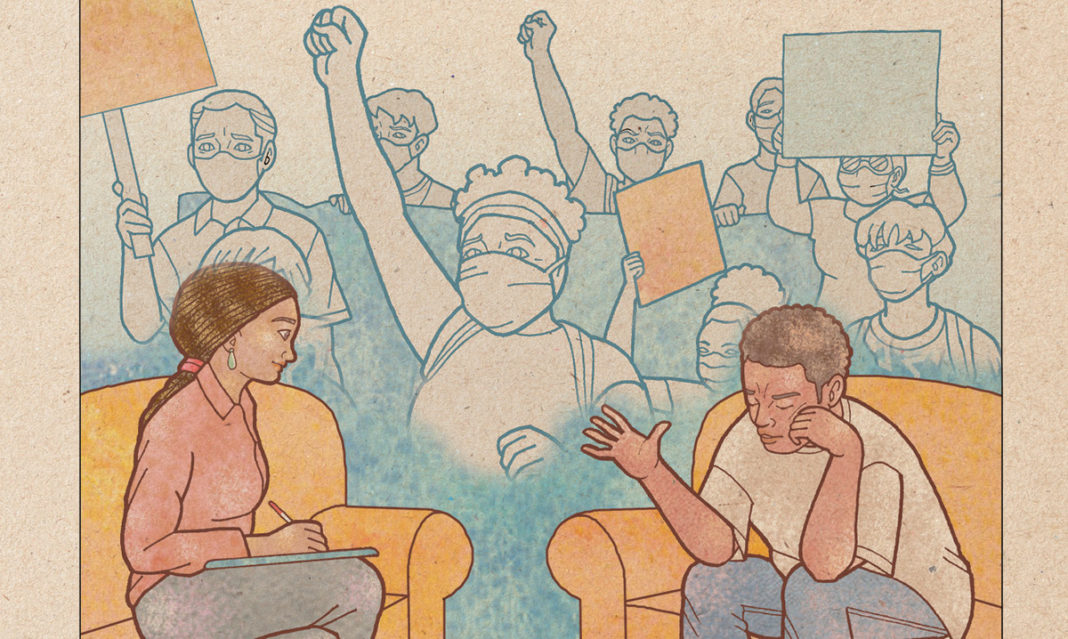 First a pandemic hits. And as we all watch, wait and worry, we start to see a pattern. Blacks, Latinos and Indigenous peoples are dying at a greater rate and are most impacted by the economic fallout.

Then the horrible death of George Floyd sparks daily protests around the country and ushers in a long overdue conversation and possible reckoning on systemic racism.

The events in recent months have taken a toll on everyone. But for minority communities, the effects have been worse. African Americans were already 20 percent more likely than white adults to report feeling sad, hopeless and overwhelmed, according to the U.S. Health and Human Services Office of Minority Health. And now those feelings have deepened further for minority communities as the issues in our collective consciousness churn up painful memories and experiences, fear for health and safety and worry for the future.

As a Black woman married to a white man, the issues of racism are not new — and have often driven her work.

“When we were dating, some people that he knew and loved had negative reactions to our relationship, and one of the biggest arguments made was, ‘What will you do with the children?’ Clearly that wasn’t OK, but I felt that if people felt bold enough to say that to a grown woman, they would say it to a child,” says Michener. Now mother to a 6-year-old girl, Michener has written books for children and teens to help with self-esteem and bullying.

Incidents like these — from culturally insensitive micro-aggressions to flagrant acts of racism — are being revisited and re-felt in light of recent events.

“People need to talk right now, Black people especially. Our country is going through an economic upheaval, and the George Floyd murder really stirred a lot of awareness and emotions. That mixes with the fact that everyone is benched and at home right now, so it leads to a lot of introspection and awakenings on both sides about how things have been,” says Michener.

“We have to know how we think and feel before we can try to converse about these things with each other and see any progress.”

And yet only 33 percent of African American adults who need mental health care receive it, according to the American Psychiatric Association. For Hispanics, that rate is more like 50 percent.

Michener says changing the way mental health assistance is viewed in the Black community is one of the reasons she started her podcast Mental Health Moments with Tara.

Seeing minority celebrities such as Charlamagne tha God or Jada Pinkett-Smith come out and acknowledge their mental health struggles — and talk about how they found help — can also go a long way to lift cultural stigma. But it’s not that simple.

“Unfortunately, we as Black people have been subject to a lot of mistreatment and experimentation at the hands of the medical and mental health community, and that created a large sense of distrust, but the stigma is a whole other thing,” Michener says. “If you feel like you’re already going to be discriminated against, you don’t want to admit to needing help mentally and marginalize yourself further.”

Another important step is education within the medical community about how to connect with and understand minority patients. The American Psychiatric Association has reported that Black patients are more likely to not get diagnosed with a mental health problem or to get misdiagnosed. This leads to inappropriate treatment or no treatment at all. Dr. Altha Stewart, the former president of the American Psychiatric Association and the first Black president in the organization’s history, called for more Black mental health professional and workers during her term. That greater professional diversity could improve cultural understanding to help bridge this gap in diagnoses among minority patients who are showing up at medical offices.

But what about COVID-19 times, when everyone is seeking therapy less?

Michener thinks we have to double down on the importance of mental health care — and, luckily, mental health therapy can be an excellent fit for our new telehealth-focused world.

“We have to be newly creative with giving people what they need, but that doesn’t mean we give up,” Michener says.