Support Systems Instead of Jail for Mental Health Needs

It’s time to approach public safety from a mental health perspective. Learn how teams in Detroit are working to divert those with mental health needs away from jail and toward community support. 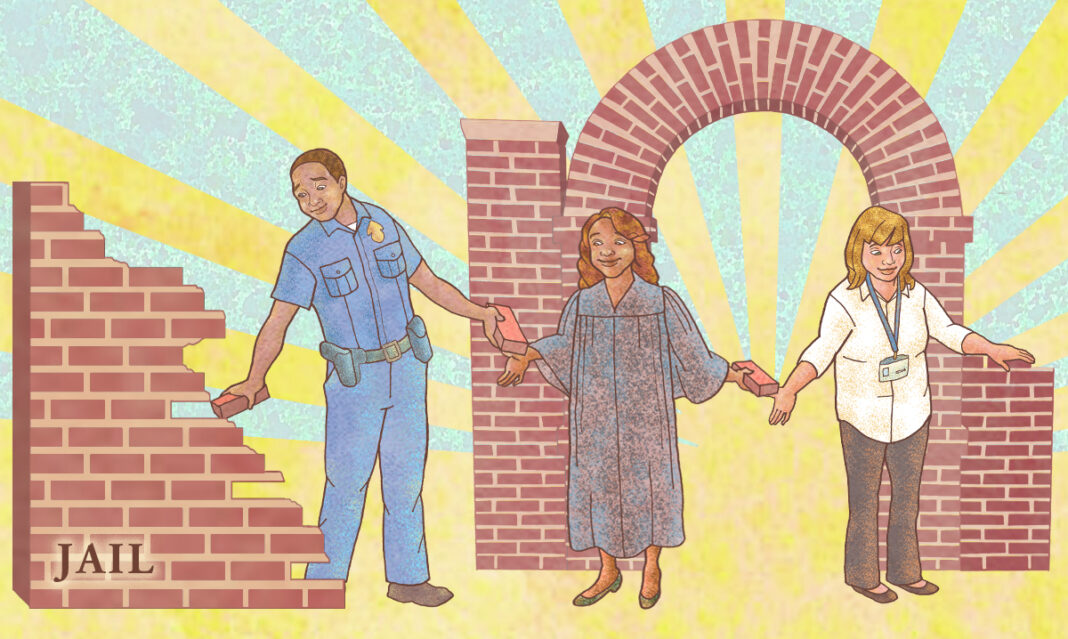 If a friend, family member, neighbor or even a stranger were to become agitated or visibly upset, perhaps yelling or gesticulating wildly, would you know how to react? With every positive intention for getting help, especially for an individual you suspect is experiencing a behavioral health crisis, would the police be your first call? What role — if any — should police play in such situations?

And, what effect does unnecessary and inappropriate incarceration have on families?

No one should lose their life because they are experiencing a mental health crisis, yet nearly 1 in 4 people shot by police in 2019 had a mental health condition, according to information from National Alliance on Mental Illness (NAMI).

Every day, the Detroit Police Department (DPD) responds to about 20 mental health calls, 70% of which are considered violent, according to information from the Ethel and James Flinn Foundation, a private foundation dedicated to improving the quality, scope and delivery of mental health services in Michigan.

Police, however, don’t always have the training or resources to be effective in behavioral health situations.

To help create positive outcomes for those experiencing a mental health crisis, the Flinn Foundation is collaborating with DPD, Detroit Wayne Integrated Health Network (DWIHN) and the City of Detroit’s Housing and Revitalization Department in a behavioral health co-response pilot program to “improve police and community relationships while addressing the mental health needs of citizens in the City of Detroit,” according to information from the Flinn Foundation, which is the first private donor to support this initiative.

One effort of this pilot program is training for police officers, 911 dispatch and homeless outreach workers that is facilitated by DWIHN to form a Crisis Intervention Team (CIT). As its name implies, the CIT will help deescalate situations involving a person experiencing a behavioral health crisis.

An additional layer of support includes behavioral health specialists working alongside individuals in the 911 call center, homeless outreach teams and police units to provide expertise and support to connect individuals with services and resources, rather than involve them in the law enforcement and criminal justice system.

“For some calls, they can divert the response and talk to the person and identify this is a behavioral health crisis and a mental health crisis and have a clinician on the line,” says Nanci Hambrick, MSW, project coordinator with the Center for Behavioral Health and Justice at Wayne State University School of Social Work, who is familiar with the goals of CIT.

“What’s so fascinating about having DWIHN embedded in 911 is they have access to HIPPA-protected information and can advise without having to share that with police,” she says. “That’s huge.”

With CIT implementation comes a new way of policing in situations involving behavioral health concerns and Hambrick recognizes the culture shift that must occur. “It’s not a small undertaking by these organizations to figure out how to trust each other,” she says. “It’s a very, very tall ask. Yet they are figuring it out.”

When police, rather than behavioral health professionals, are responding to calls in the community, families and children are inevitably affected.

According to the nonprofit Prison Policy Initiative, women are disproportionately held in jails rather than in prisons and 80% of women held are mothers.

“Beyond having to leave their children in someone else’s care, these women will be impacted by the needlessly brutal side effects of going to jail: aggravation of mental health problems, a greater risk of suicide, and a much higher likelihood of ending up homeless or deprived of essential financial benefits,” the organization reports. Two-thirds of people in jails have a history of mental health problems or are experiencing serious psychological distress, yet only about one-third receive treatment, according to information from the Prison Policy Initiative.

Here in Michigan, 1 in 10 children have experienced a parent in jail or prison, according to a 2016 report by The Annie E. Casey Foundation. “Having a parent incarcerated is a stressful, traumatic experience of the same magnitude as abuse, domestic violence and divorce,” the report says, underscoring the potential for lasting negative impact on the child.

“Once a parent gets into the jail system, it’s hard to get out,” Hambrick says. Because of current bail systems, even individuals who are arrested for driving on a suspended license and don’t have the financial resources to post bail are held in jail — and that means mothers are away from their children.

“Who is taking care of their kids? Do they go to the foster care system? What does that look like? Once a mom goes to jail, it’s really hard for the family,” she says, adding that groups are actively working to make sure poor people aren’t disproportionately in jail because our jail system is based on your ability to pay. “Seventy percent of Wayne inmates are there pretrial but don’t have money to bond out.”

Diverting to care within the community

In a functional system, individuals experiencing a mental health crisis would instead be connected to high-level care in the community, rather than cycle in and out of the criminal or law enforcement system.

Part of the work that Hambrick has done is to analyze jail data to determine what proportion of individuals being held has a behavioral health concern — a challenging job when there is no statewide database and individual counties manage their own data. One such effort was nearly launched in Wayne County in 2015 as part of a national push to get a handle on this data, but was neither organized nor federally funded.

While many entities see the value in initiatives that pull together and analyze data regarding behavioral health, funding is typically scarce, Hambrick says. Yet the Flinn Foundation recognized the need to facilitate this effort.

“In 2019, the Flinn Foundation approached us (at the Center for Behavioral Health and Justice) to see if we could help facilitate the coordinating work around crisis intervention. We have mapped out intervention points and identified ways to intervene in the system to help keep behavioral health people out, or if they are in the system, what treatment can be offered to help them from reentering,” Hambrick says.

She now works to connect individuals so they can reach beyond their individual frameworks to help divert those with behavioral health needs toward support systems rather than the criminal justice system. She refers to this work as behavioral health transformation, which requires translation between the languages of the legal, mental health and law enforcement communities.

“To be clear, as a facilitator, the only thing I can do is work with judges to bring people together,” she says. “I’m not responsible for the outcomes and I don’t have the money or power to make changes, but I can facilitate the work to get it done.” Much of Hambrick’s work involves communicating and facilitating meetings.

“We have a lot of high-level people committed to this work who serve as boots on the ground so that I can communicate up and down and really ask people to look beyond their own frameworks,” she says. “We’re mapping out and sharing what happens in these systems.”

This is work that likely wouldn’t happen if it weren’t for organizations like the Flinn Foundation, Hambrick says.

“Without philanthropy saying ‘yes, we believe in the work,’ it wouldn’t happen and it didn’t happen.”

Learn more about the work of the Ethel and James Flinn Foundation at flinnfoundation.org.

Calling all chocolate lovers! Head to Oakland Mall for a day full of selfies and sweets.
Read more
You

Parents in need of pampering are in luck, as there’s a relaxing and revitalizing spa offering just around the corner.
Read more
School Issues