The Gift of Organ Donation

A Children's Hospital of Michigan patient's organ transplant success story is just one example of the life-saving potential organ donation has for thousands. 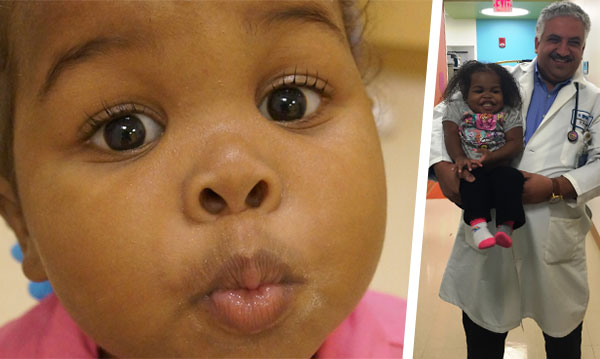 It’s a nightmare situation for any parent to find out their child has a serious medical issue. So imagine the stress of knowing to keep your child alive, they’ll need an organ transplant – and could be on the waiting list for a critical amount of time.

It’s not an uncommon occurrence. There are about 125,000 people on the organ donor waiting list nationwide, according to The Gift of Life Michigan and approximately 2,000 children, Organ Procurement and Transplantation Network data estimates.

Southeast Michigan mom Kenshella Moss knows the stress all too well. Moss noticed her infant daughter Ja’Nyla Benson had yellow eyes just a few weeks after she was born, and at about 7 weeks old, she found herself at the emergency room with Ja’Nyla due to severe diaper rash. Further diagnosis at Children’s Hospital of Michigan in Detroit reveled baby Ja’Nyla was jaundiced and had a rare, life-threatening liver disease called biliary atresia, meaning the bile ducts developed abnormally.

After an unsuccessful surgery to reconstruct her bile ducts at 8 weeks old, it was determined Ja’Nyla would need a liver transplant.

“I was so scared and remember crying nonstop for one week trying to comprehend what this meant for Ja’Nyla,” mom says. Ja’Nyla was added to the waiting list Feb. 14, 2014. To keep her on the list at a certain weight, Ja’Nyla was on a special diet and Moss had to use a feeding tube and give her a multitude of medications.

According to Dr. Kelly Collins, liver transplant surgeon at CHM, recent numbers calculated by the Scientific Registry of Transplant Recipients show “about 75 percent of kids on the waiting list will get a liver transplant within three years.” The wait can depend on how sick the patient is and their size, too. During that time, the sequelae of liver disease causes children to be “fragile” to additional stress and illness.

Adds Collins: “Without liver transplant, those children (with biliary atresia) wouldn’t be able to survive and not all of them do survive.”

Luckily for Ja’Nyla, a liver donation came sooner than the normal – on Christmas Day in 2014. It was only a couple days following the transplant that Ja’Nyla was showing signs of improvement, and a couple weeks later, standing up.

“She was not able to do that before her transplant,” Moss says. “Clearly the only thing holding her back was the liver. I’m so happy to say she is active, healthy and has a gift for making people happy.”

Now, mom volunteers with Donate Life America encouraging people to sign up as donors to save lives.

“It’s not just children-to-children donors that are important,” Collins says. “About 15 percent of transplants that are done into children are using an adult organ that we split into pieces, so that a portion of the liver goes to a child and then the remaining portion can go to another adult or another child.”

“Through that gift a lot of patients are often able to be helped,” she notes.

Collins adds that a great part of being a transplant surgeon is seeing those patients years down the road. With liver transplants, she notes, 90 percent of those are successful at one year; with 80% success at five years. In many cases, that’s taking kids from an 80 percent risk of death to an 80 percent chance at life, Collins explains.

“We get to watch them grow up and go on and lead a normal life,” she says, “like any other kid.”