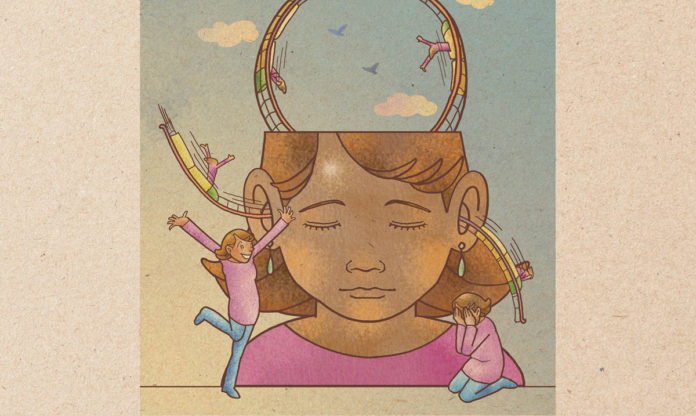 A 12-year-old with a grandiose plan to start a business buys office furniture with his parent’s credit card. An 11-year-old steals the keys to his parents’ car to go on a joy ride. A 15-year-old locks himself in his room because he doesn’t want to see friends or family. What do these three kids have in common? They are all showing signs of bipolar disorder.

“Bipolar disorder is associated with mood swings, ranging from manic highs to depressive lows,” says Ben Delaney, board certified psychiatric mental health nurse practitioner at the Murray Center for Behavioral Wellness in Southfield. These mood shifts, which aren’t attached to a life event, are abnormal or inflated and can cause school struggles, social issues and even problems with family.

“The highs can last anywhere from a few days to months — even a year. When people are high up, they are more distractable — going from topic to topic, conversation to conversation,” he says.

While on a high like that, people feel good and aren’t likely to report any issues. It isn’t until they hit a low that they might reach out to a mental health provider for help. But that can be a problem when it comes to getting the proper diagnosis.

While the average age of onset is 25 years old, Delaney notes that teens and even children as young as 8 or 9 can present symptoms of bipolar disorder. Many times, however, these children get diagnosed with depression.

“Unfortunately, when people first seek treatment, on average it can take 10 years to actually get the correct diagnosis of bipolar disorder because kids will present with depression, we won’t ask the right questions or maybe they’ve never had a manic episode,” he says.

Down the road, they end up with the diagnosis of bipolar disorder, which according to the National Institute of Mental Health, impacts an estimated 2.9% of adolescents.

So, how is this brain disorder diagnosed and treated? Read on for insight, plus advice on how to support a loved one with bipolar disorder.

When a child is on a high, you might notice risky behaviors such as raiding their parents’ liquor cabinet or using drugs. That same child might need little more than two to four hours of sleep each day.

When a child hits his or her low point, depression often hits, Delaney notes. If a child is isolating and not wanting to see friends and family, or spending a lot of time in their room, take note. Same goes for those who are often feeling bad about themselves, lacking physical and mental energy, having an increase or decrease in appetite, or those with suicidal thoughts. Keep an eye on your child’s mood — both elevations and drops. Contact his or her mental health provider immediately if you notice any shifts in mood or sleep.

When it comes to treating bipolar disorder, a combination of therapy and medication is key, Delaney says. Staying on medication long-term will help prevent future episodes.

“We think that bipolar disorder is similar to kindling a fire, so you get little sparks, little episodes and eventually if more episodes go untreated, you get a full-blown episode — like a huge fire,” he says. “So it really is best to intervene now and long-term.”

Adjustments to medications will be made over time, which is why it’s important for a person to meet with his or her therapist often. With kids, Delaney says, those meetings tend to be monthly.

Mood stabilizers, such as lithium, anti-seizure medications such as Lamictal, and anti-psychotics like Abilify, which help with depression and anxiety, are just some treatment methods for bipolar disorder, Delaney says. Lithium is the “gold standard for bipolar disorder treatment,” he adds.

While some people might believe if you have bipolar disorder that you are ill and cannot function in society, Delaney says that’s not the case.

“With the right treatment, the right therapy and the right support by your clinician or your family members, people with bipolar disorder can live successful, fulfilling lives just as anyone else,” he says.

If your loved one has bipolar disorder, Delaney says it’s imperative to be there for that person, even if it isn’t always easy.

“No. 1 is to be patient, to be supportive,” he says. “When they are in an episode, whether it’s mania, hypomania [a less severe, but still recognizable, form of mania] or depression, they may not be in their best state of mind or be their best selves in that moment and you don’t want to isolate from them. You want to be there for them.”

Brought to you by the Ethel & James Flinn Foundation. Find more information at Flinnfoundation.org. 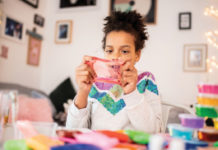 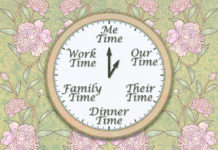 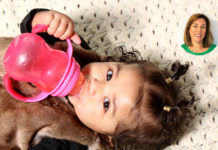 What Is a Sippy Cup’s Effect on Optimal Speech Development?