Learn about the different types of eating disorders, what causes them and how families can cope. 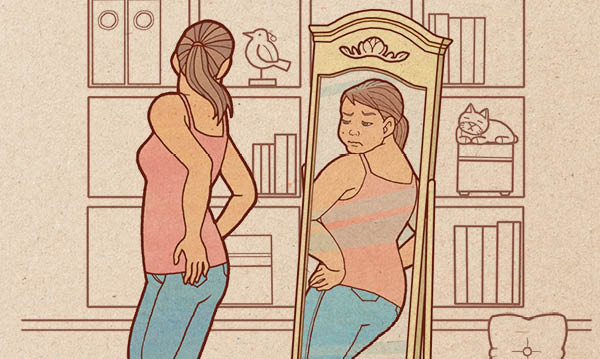 When our children look in the mirror they don’t always see the beautiful, brilliant people we know them to be. Sometimes they see someone entirely different.

It’s part of a silent, hidden struggle for many adolescents and adults – and a potentially deadly one. Eating disorders, characterized by abnormal eating habits and distorted body image, are dangerous and often misunderstood.

Like those dealing with depression or anxiety, people with eating disorders can’t simply “snap out of it. It’s not a lifestyle choice as sometimes assumed.

“It’s quite serious,” says Kevin Sloan, a psychologist with Beaumont Hospital’s Weight Control Center in Royal Oak. “A lot of times people are not really aware that it is occurring, particularly with younger people, because there’s this secretive component to it.”

Getting help for your child is vital.

“It really requires that once a parent becomes aware that this is occurring, I think they should without hesitation seek out outside resources to help them to deal with it,” he says. “It can really create a lot of stress and pressure on a family.”

National Eating Disorders Awareness Week is Feb. 26 through March 4 and there’s no better time for parents to find out about the signs and how serious these disorders can be. According to the National Institute of Mental Health, about 2.7 percent of 13- to 18-year-olds in the United States have an eating disorder. Girls are more likely to be affected.

Bulimia typically involves uncontrolled eating of large quantities of food in a relatively short period of time, followed by “compensatory behavior such as regurgitation or excessive use of laxatives to rid the body of the excess calories,” he says.

Binge eating disorder is characterized by consistent episodes of consuming large quantities of food along with feelings of loss of control with food.

What should parents look for? Warning signs for anorexia include eating very little food or eating only certain foods, excessive exercising, obsessive calorie-counting or weighing oneself and taking diet pills.

“A person with anorexia may have a distorted body image and express concerns that they are fat and need to be thinner despite perhaps already being thin,” he says.

People with bulimia may be thin, overweight or a normal weight.

“Bulimic behavior, including throwing up, is frequently done in private due to the shame or disgust that the person feels,” Jones says.

Binge eating disorder signs include repeatedly starting diets to compensate for binges, sharing disgust about overeating, eating alone because of embarrassment or eating when not hungry.

“Due to both these serious medical issues as well as the heightened risk of suicide, eating disorders are considered to be among the most dangerous mental health issues,” he says. But they are treatable. “People can and do recover from them.”

The best professionals to treat eating disorders include physicians, psychologists, social workers and counselors. Inpatient and outpatient treatments are available.

“The most important thing to do when a child or another loved one has an eating disorder is to be empathetic, supportive and non-judgmental,” Jones says.