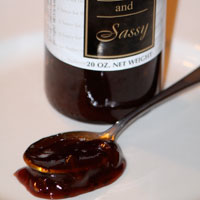 Note: This is the first in a series of Michigan-made products Crumbs is highlighting throughout 2011. Scroll down to share your favorites!

Years ago, Randy Schauwecker had a problem: He wanted a good barbecue sauce to use during his frequent grilling nights. "But I couldn’t find one without that canned smoke flavor," explains 62-year-old Randy.

So he worked over two summers – tweaking here, adding more spices there – to perfect his Sweet & Sassy sauce. And, in the 15 years since he first started bottling the sauce, he’s slowly built up a following as customers have shared it with friends – who’ve then spread the word about the versatile, tangy sauce.

Randy and his wife Nancy have called Iron River, Michigan home since 1973. That’s when they opened their Lac ‘O Seasons resort along the Stanley Lake in the Upper Peninsula. Randy describes Iron River as "a little bit like Mayberry. We have two stop signs in town. It’s a great place to live. A great place to raise children." And, of course, the perfect place for visitors to experience the beauty of the U.P.

Years ago, Randy started taking guests fishing at the nearby lakes. Reservations for fishing trips became so frequent that Randy often missed dinner with his own family, and his two children (now grown). He decided instead of always having fishing trips available for guests, he’d give grilling nights a try. And with grilling came the need for a sauce.

"I knew I wanted something sweet," says Randy. He kept adding ingredients and changing amounts each time he made the sauce for guests. "I ended up keeping parsley and onions," he explains, while ticking off why each ingredient was included.

He knew he had the sauce right when he found guests more than once running a finger on the rim of the sauce bowl trying to get the last drips.

The thick sauce has a dark caramel color that’s easy to spice up with a few red pepper flakes or to make into a dinner sauce by adding melted butter. (Nancy likes to dip eggrolls in it, and Randy’s favorite way to serve it is slathered on ribs.) What Randy likes best about the sauce is that "It’s so doggone forgiving."

"I get a bit chatty when I’m outside grilling," says Randy with a chuckle. "But even if I overdo the timing, I can always add another coating of sauce, and the sugar in it just caramelizes. Then goodness you’re right back to being able to put it on the table!"

Where to find the sauce

While you can still email Randy directly to order a jar (or a case) for yourself at randy@lacoseasons.com, more and more specialty grocers in the greater Detroit area are starting to carry the sauce too. You can find it at Westborn Markets, Hiller’s and other spots.