They're a bit creepy – and very delicious! Use an Architec Stackable Appetizer Maker device, or modify with baking pan, to make this kid-friendly snack. 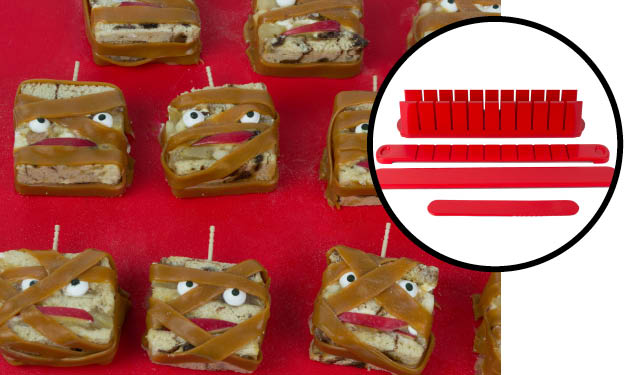 For kids, treats and Halloween go together like peanut butter and jelly. And these silly scary-looking bite-size morsels also feature some of the iconic flavors of the autumn season, including cinnamon, apples and caramel. Best of all, they don’t even require firing up the oven!

This fright-night recipe is a creation of ArchitecProducts.com, makers of the Stackable Appetizer Maker. This nifty device, which costs $19.99, includes a main body, “Cut & Carry Base,” tamper device to press the dry layers, spreader/serrated knife and a cookbook with 40-plus recipes. With the maker, app assembly process takes about five minutes, manufacturers say, and the pieces snap together when you’re done for easy storage (check out this Stackable Appetizer Maker video to get a better visual).

Don’t have the gadget – or don’t want to drop the bucks? No problem. You can also create this recipe old school, using a baking pan (a slim one, such as a bread-loaf pan) or even a cupcake tin. Ready to raid the cupboard and create these treats? Here’s the how-to!