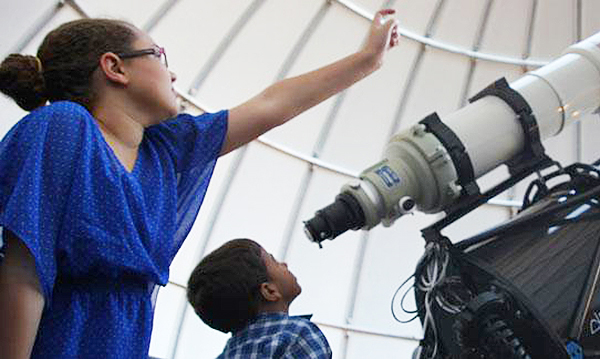 Tucked away inside Cranbrook’s expansive educational campus in Bloomfield Hills, the Cranbrook Institute of Science is a natural history and science museum that welcomes more than 200,000 visitors each year.

Offering hands-on science experiments, 150,000 objects in its collections, a planetarium, observatory and even a Bat Zone, the center is open year-round with ticket prices between $9.50 and $13 – and is free to visit the first Friday of each month.

We visited on one such Friday along with many other families who had the same idea. Though bustling with activity, there was plenty of room to explore and try out the hands-on exhibits without any wait. Here’s what we found especially exciting for kids.

This part of the interactive Our Great Lakes Watershed gallery examines the world’s freshwater supply and how we can protect it. Kids will love the exhibit where they can adjust moisture levels in the air and the temperature on the ground to make it rain, hail, sleet or snow.

In the same area, kids can make waves in a clear container by turning a paddle, letting them see the shape and frequency of waves bisecting as they move right to left. They can also control a spinning water vortex.

Kids who love rocks will adore the Mineral Study Gallery, which has more than 1,800 specimens on view including many they can touch. Cranbrook founder George Booth started the mineral collection in 1926 with only a few hundred specimens and it now has more than 11,000 including 300 from Michigan. They’ll also enjoy Every Rock Has a Story, an exhibit about the materials that make up the earth and the processes that have shaped the globe over time.

Cranbrook Space Odyssey is a temporary exhibit featured through Aug. 31, 2015 where kids can learn about black holes, the Hubble mission (check out the scale model of the Hubble), telescopes and more through hands-on, interactive games and exhibits. Kids will enjoy sitting down at the touch-screen computers to send a question to a scientist or an e-card to a friend.

Kids will marvel at the full-sized Tyrannosaurus rex skeleton cast located near the main entrance to the museum. It’s part of the Life Changes Over Time gallery, where kids can learn about natural selection and evolution by exploring the question “Are birds the descendants of dinosaurs?”

How often can kids say they saw a vampire bat up close? The Bat Zone has many types of bats (all injured/unable to be released – not taken from the wild) and features other night-time animals like a two-toed sloth, owls and flying squirrels. Kids may not like the smell, but the experience is well worth it!

You’ll have to time your visit better than we did in order to take full advantage of the museum’s popular observatory but we know this is a highlight for many young visitors. If you can’t see stars based on the time or weather conditions during your visit, consider watching a show at the museum’s newly remodeled planetarium featuring a 360-degree aural experience.

A focal point kids will surely notice in the Astronomy Lobby is the copernican orrery, a mechanical model of the solar system that is one of three commissioned copies of an original design built by M. Sendtner for the Deutsches Museum in Munich, Germany. The eye-catching orrery depicts the moons and planets that were known to exist when the original was constructed in 1911.

Kids will be amazed by what they can learn about the last Ice Age and extinct animals like the mastodon, which used to be plentiful in Michigan. The life-sized mastodon model is sure to get some oohs and ahhs.

Kids who are too on-the-move to read the information displayed on an exhibit might be willing to stop if they get to use mom or dad’s cell phone to scan QR codes. These can be found on an increasing number of exhibits throughout the museum.