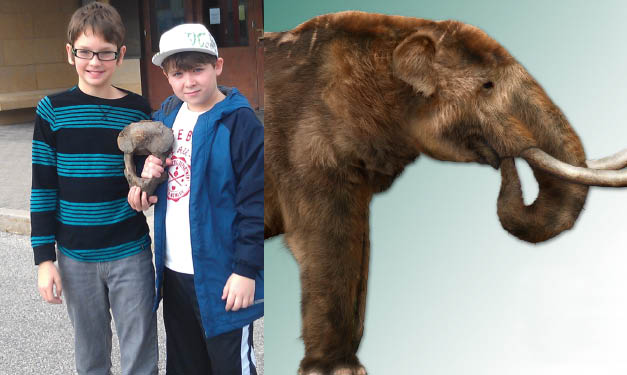 Eric Stamatin and Andrew Gainariu can cross “make a prehistoric discovery” off their bucket lists. What the 11-year-old boys thought was a strange rock turned out to be the bone of an honest-to-goodness mastodon.

The cousins made their discovery in June of 2012 at the creek near Eric’s Shelby Township home. The boys were cray fishing and decided to make a small dam out of sticks and stones. That’s when they spotted a particularly weird rock sticking out of the water.

“We were very curious about it,” Eric told Metro Parent. After his dad suspected it was an animal part of some sort, the hunt for answers was on.

Ultimately, they found their way to John Zawiskie, a geologist at Cranbrook Institute of Science in Bloomfield Hills, who took a look in November. He concluded it was the axial bone from an adult mastodon’s spinal column.

Eric’s reaction when he heard that news? “Wow, that’s amazing!” he recalls. “We thought we were going to be celebrities.” Now, national and international news outlets are covering the boys’ discovery.

“We were totally in awe,” says Eric’s mom, Cristina Stamatin – who notes that the family is thinking of hanging onto it. “It’s so precious. There’s no price on it.”

It’s a classic “feel-good story,” adds Zawiskie. “It’s two kids exploring on the landscape and finding a treasure. How many of us have thought about doing that?”