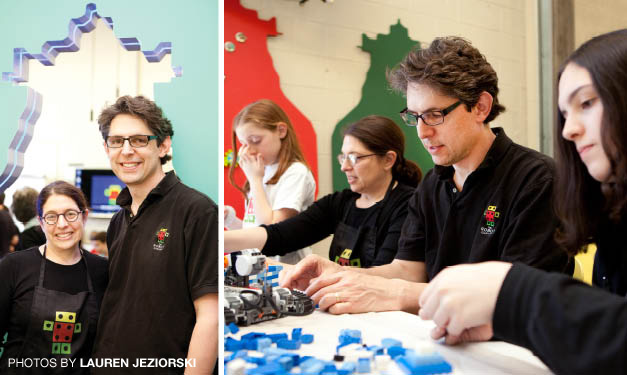 Tucked in a former Birmingham industrial park sits a place unlike any other.

Inside a converted warehouse with clear garage doors, kids of all ages pore over thousands of LEGO pieces. They design and build to their hearts’ content, free to explore their inner architect, engineer or just build the latest Star Wars LEGO playset.

This haven for all things LEGO and robotics is The Robot Garage, opened in June 2011 by husband and wife Jonathan and Sarah Jacobs. After years of working for others, the Jacobses wanted to control their own destiny and do something they believe in.

“I realized there was no brick-and-mortar place where kids could come build or engineer robots,” Sarah says, “and for people who really build seriously with LEGO.”

The impetus for The Robot Garage, located on Eton Street in Birmingham’s Rail District, goes back to Jonathan’s love for the colorful blocks. He says he always liked LEGOs as a kid, but they were too expensive. He settled for Fischertechnik, a German brand of construction toy. From then on, he was hooked. As an adult, Sarah says her husband would stay up until 3 a.m. to make robots.

(Even while sitting for an interview for this article, Jonathan was busy constructing – from scratch – a blue-and-gray LEGO brick house. He meticulously and effortlessly finished the building, all the while answering questions and talking about the business.)

“He’s like the kid in the movie Big,” Sarah, 48, jokes. “He just cares a lot about having fun.” Which is why Jonathan, also 48, says he wants The Robot Garage to feel like the fun day in science class, when kids get to build stuff or blow it up before they have to do six weeks of a lab report. His goal, he says, is “not that a kid comes to one class and they’re an engineer,” but that they have fun and, perhaps, learn math and science along the way. Creating a place for the community to come together, not through a virtual social network, was very important, too, he says.

Family is a major part of The Robot Garage. Daughters Jane, 14, Kate, 12, and Thea, 10, all help. In the business’ upstairs, each child has her own office. The girls have roles and responsibilities, whether participating in workshop classes, helping other kids build creations or handling merchandise.

“We used to have friends come over and, to them, we were the LEGO kids,” Jane says. “We’re the kids who have giant buckets of LEGOs in our basement. We would just go sit and hang out there for hours. Most people don’t have a giant pile of LEGOs. I think we took it for granted. We forgot how much fun it is to sit in a gigantic pile of LEGOs and just let your imagination wander.”

Jane also loves robotics competitions, which she’s done since middle school. Kate, who likes robotics too, is more interested in the design and architecture. Thea isn’t as into either, but she’s very competent – and quick to help anyone at The Robot Garage.

Mom is the first to admit she’s less engineer-minded than the rest of the clan. Instead, Sarah’s more the artistic type. “I’m like the art mom in the engineering family.”

But that’s what makes The Robot Garage – and the family – work. Everyone has a skill, and they’re all willing to make it happen.

“The Robot Garage has been a family journey since its inception. The opportunity to take an idea through development and make it a reality – that’s a gift for anyone,” Sarah says. “To do it together with your family is like no other experience.”

The garage holds classes and camps on robotics, architecture and engineering – all teaching with LEGO and other products. For example, seven weeks of camps start on a 10-by-10-foot table. In one, participants have five days to build an enormous LEGO city.

The Jacobses also take The Robot Garage on the road and into classrooms. Teaching kids the importance – and fun – of science, technology, engineering and mathematics, aka STEM education, also drives the Jacobses.

“For (American) kids to succeed in this world, they really need to understand engineering and technology,” Sarah says.

The garage also rents space for birthday parties. Kids can build robots and have them battle in a designated space. A LEGO robot also delivers the birthday boy or girl a cupcake, topped with a candle to make a wish.

The payoff is when parents say: “‘I wish this had been here when I was a kid,'” Sarah says. “And then you know they get it.”

In September, the Jacobses celebrate their 20th wedding anniversary. They met in high school at Cranbrook Schools in Bloomfield Hills. Jonathan did his wife’s homework, she jokes. He went on to earn engineering and business degrees; she, fine arts.

To see the way they are now, you’d never believe they never planned on having a family.

“We were going to live in New York for the rest of our lives, travel, be footloose and fancy-free,” Sarah says. “I was in the fashion industry. Jonathan was beginning to work on websites for advertising agencies.” But after 12 years in the Big Apple, they grew homesick and moved back to Michigan – and family. They also wanted their kids to know their grandparents, just as they did growing up.

Last fall, Thea let mom know how happy she was they opened the store. The pair were together at the LEGO KidsFest event at Suburban Collection Showplace in Novi. Thousands of people were coming in and out of their robotics booth that weekend, when Thea reached up and gave mom a huge hug.

“And with an equally huge smile, she whispered into my ear, ‘I’m so proud,'” Sarah recalls. “I wasn’t really sure what she was talking about. But when I asked her, she just said ‘I’m so proud we started The Robot Garage.’ It’s moments like that that make all the juggling of family and business worth it.”

Different Kinds of Bug Bites in Michigan Parents Should Know About

If you spot a potential insect nibble on your child's skin, here are a few different kinds of bug bites in Michigan to keep on your radar.
Read more
Advice

What should American children know about our country, and how can parents instill patriotism for kids at their home? Teachers share these 10 examples of patriotism.
Read more