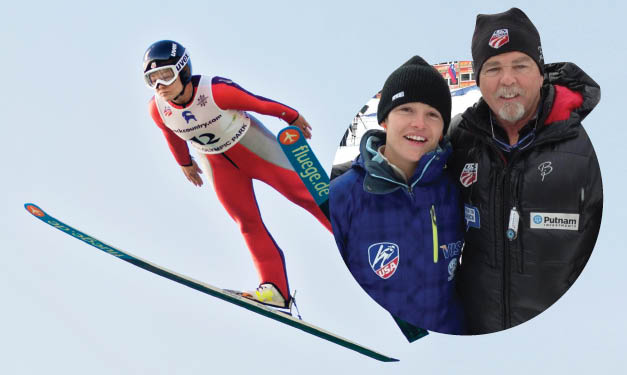 Nobody wants their children’s dreams to have a dead end.

But that’s what Michigan native Barry Van lived with for 20-plus years. His daughter, Lindsey, who was born in Grosse Pointe, was a ski jumping prodigy. She made her first flight off a 3-meter ramp when she was 6. That was in 1991, several months after the family left Michigan for a new life in the mountains.

By the time Lindsey was 12, she was soaring farther than the top U.S. men during training. She won her 16th national championship this fall, has posted more than 50 top-three finishes in international competition and won the first women’s ski jumping world championships in 2009. In fact, she held the record for the longest jump on the Vancouver hill until the men’s gold-medal-winning performance there at the 2010 Olympics.

Her success came with family sacrifice. Barry estimates they’ve spent upward of $150,000 on her training, travel and equipment. As a teen, Lindsey put her babysitting money toward the costs. Father, mom, stepmother and friends shared driving duties to get her to practice and workouts. If they weren’t available, she walked up the road from their house to the hill, skis slung over her shoulder.

But despite her unprecedented achievements and dedication, Lindsey could never reach the pinnacle of sport. The Olympic Games never included women’s ski jumping.

And there was nothing her father could do about it.

“I think it was hard for (my parents) to see me follow something that didn’t have much of a future,” Lindsey says.

Barry knew from the start the Olympics weren’t possible, but how could he explain to his grade schooler that she couldn’t have the fame and fortune that surrounded them in Park City, Utah? It’s a winter sports-focused town where Olympic stars are kids next door.

“I thought Lindsey would just do this ski jumping until she found another sport she liked during the winter,” Barry says.

But she didn’t. And she became the de facto leader in the fight for inclusion of women’s ski jumping in the Olympics.

Girls, the old thinking went, weren’t built for jumping and hadn’t established they were good enough or jumping in sufficient numbers internationally to warrant an Olympic event.

Dedication to the dream

Barry knew otherwise and admired Lindsey’s self-motivation to train, compete and continue, even without the possibility of Olympic opportunity. Let alone glory.

What parent wants to have the role to keep their kids’ aspirations in check?

Barry was familiar with the pressures and dynamics of sport at the highest level. His father, George Van, was a longtime sports writer at the Detroit News. Barry says he knew the emotional and financial costs of Lindsey’s dedication were high, but he stayed invested.

How could he abandon Lindsey’s dream before she did? Could he consider talking her out of it? “No way,” he says. “She was on her own agenda.”

Barry continued to watch her train, jump, suffer injuries, go through surgeries and complete physical therapy – and fight for inclusion of her sport.

She traveled the country for fundraisers and media events, raising money for training and the profile of the athletes. She was the lead “character” in an independent documentary, Ready to Fly. Now available on iTunes, the film is an honest, insider view of Lindsey’s stresses and struggles with not only the fight for inclusion but with her own role in the spotlight of sports and its politics.

Lindsey credits her parents for their support that never came with conditions.

“They never steered me in a direction they thought would be best for me,” she says. “They were behind me in whatever I wanted to do and fully supported my decisions.”

Finally, in 2011, the family could celebrate. The International Olympic Committee reversed course, allowing the women to jump in the 2014 games.

Both Vans say today’s stress of trying to make the first women’s Olympic ski jumping team and the pressure that comes with being the front-runner are actually minimal compared to the fight for inclusion.

“My mindset after jumping for 22 years is quite simple,” says Lindsey, now 29. “I don’t make too many goals anymore. I don’t want to limit myself or not enjoy myself if I don’t achieve a goal I have set out.”

At the end of this month, the Van family will be slopeside at Lindsey’s home hill, the Utah Olympic Park, which hosted the 2002 bobsled, luge, skeleton, ski jumping and Nordic combined events.

They’ll watch Lindsey soar even farther into history when she competes in the first U.S. Women’s Ski Jumping Olympic Trials, to be held on Dec. 29 and broadcast live on NBC. The trials’ winner will be automatically named to the Olympic team, and up to three other women to be named later will join her in Sochi, Russia in February.

“I will be a weeping mess with sunglasses on,” Barry says, anticipating the trials. “I hope no one wants an interview.”