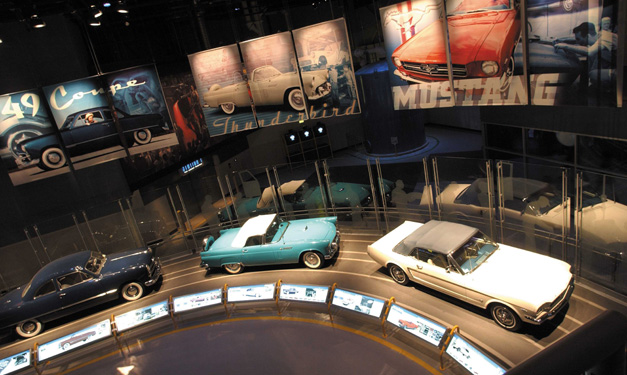 Looking for an around-town family activity to really rev your kids’ engines? Fortunately, in metro Detroit, you don’t have to travel far. In fact, we’re home to the MotorCities National Heritage Area, which includes automotive sites and landmarks in 10,000 square miles of southeast and central Michigan.

And with weather getting chillier, autumn makes for the perfect time to head to the great indoors – and discover these five cool car havens, including The Henry Ford, the T-Plex, Ypsilanti’s Automotive Heritage Museum, the Walter P. Chrysler Museum and Motorsports Hall of Fame.

This Dearborn lure is a primo place to marvel at the automobile’s profound impact on the United States. Its massive fleet of historic cars isn’t limited to Fords, including many other makes and models.

Scope out the Henry Ford Museum‘s world-famous collection Automobile in American Life. It explores America’s fabled love affair with the car, featuring models from a 1902 "racer" to the first Mustang to some snazzy electric models. Hungry for more? Sate your appetite at the Transportation exhibit, featuring over 200 autos and trucks created between 1865 and 1984. And Presidential Limousines is a definite must-see, showcasing five autos used by commanders in chief – including the Lincoln Continental convertible in which President John F. Kennedy rode when he was assassinated in 1963.

Of course, don’t overlook the Ford Rouge Factory Tour, either. Departing from The Henry Ford, this program features five acts, including a historic driving tour and a walking tour of this actual F-150 assembly plant. Kids can even try their hand at "installing" a steering wheel themselves.

The original Model T plant – aka the Piquette Plant – in Detroit is worth a visit, Davis says. "It’s not the kind of thing where you spend a lot of time, but it has significance. It’s an island in time. It was there that the Model T was conceived."

Ford built the three-story plant at the corner of Piquette Avenue and Beaubien Street in 1904, a year after the company’s launch. The first 12,000 Model Ts were built at the plant in 1908-09. Ford moved out in 1910 and sold the building to Studebaker, which used the ground floor till the ’30s.

"The upper two floors just sat there for the next 90 years," Davis says. In April 2000, the current owners bought the building. It now showcases 40 cars from the Model T era built by Ford or its competitors, all in Detroit.

This last surviving Hudson dealership displays cars built in Ypsilanti – and autos built in the city, including the city’s Willow Run plant. The car was named for one of the company’s chief investors, department store magnate J.L. Hudson. Museum owner Jack Miller’s dad, Carl, opened the dealership in 1927.

Its three buildings in Ypsilanti’s Depot Town house more than 30 classic vehicles models by Hudson and Kaiser Frazer. There’s also an auto prop from the 1988 film Tucker: The Man and His Dream, because Preston Tucker owned the Ypsilanti Machine and Tool Co. And there’s a Rolls Royce.

"From 1955 to 1993, the Hydramatic transmission used in the Rolls Royce was manufactured at the Willow Run plant," Miller explains. He continues the dealership tradition and sells a few old Hudsons every year.

Created in 1999, this museum sits on 10 acres at the Chrysler Headquarters Complex in Auburn Hills. Paying homage to a "Big Three" original, it explores the history of Chrysler, Jeep and Dodge – plus phased-out brands like DeSoto, Hudson, Nash, Plymouth, Rambler and Willys-Overland.

Take home a model – many highlighting the museum’s exhibition vehicles – or other souvenir from the gift shop. (Grab a discount coupon, too.)

"The Detroit Science Center is the ideal location for the Motorsports Hall of Fame," says president Ron Watson. "Both institutions seek to inspire and educate by showcasing technology and engineering."

Looking for a place your child can go to learn some skills? Check out one of these spots in metro Detroit and Ann Arbor that offer self-defense classes for kids.
Read more
Macomb County Education