Bicentennial of the War of 1812 Events in Detroit 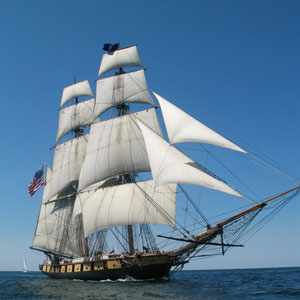 Step inside an exact replica of the Brig Niagara – one of the last remaining ships of the War of 1812 – as Detroit commemorates the pivotal war with a bicentennial celebration running Sept. 4-10, 2012. The seven-day event features loads of activities along Detroit's RiverFront.

Quick history lesson: Michigan was a key force in the naval battles of the War of 1812. It was here, in the Great Lakes, where the Americans prominently proved their resiliency against the British Navy. So it's only right for a celebration to take place here in Detroit – one of 30 cities included in the bicentennial festivities.

Give kids a taste of the Navy life with guided tours of the Brig Niagara – which start at noon on Sept. 6-10. Since the ship is expected to be major family attraction, we suggest getting there early to ensure your spot in one of the tours.

Catch a military country music concert on Saturday, Sept. 8, which features country music singer Darryl Worley. The concert begins at 4 p.m. (or 1600 hours for you military men and women).

Also, kids will have a chance to see real-life flight simulators, experience an interactive submarine tank – and look at multiple U.S. Marine Corps vehicles and mounted weapons systems, including a Navy helicopter display.

Attention mom and dad: The Detroit Branch of the 1812 Commemoration Committee is hosting an opening night Navy welcome gala from 7 to 10 p.m. on Thursday, Sept. 6 at Detroit's Fox Theatre. Purchase tickets for $100 or $250 – for a special night out.

Experience this once-in-a-lifetime event and celebrate and "re-learn" about a war that is a classroom staple across America.

See the Metro Parent listing for more information on the Bicentennial War of 1812 Celebration in Detroit.