Blue Man Group at the Fisher Theatre in Detroit 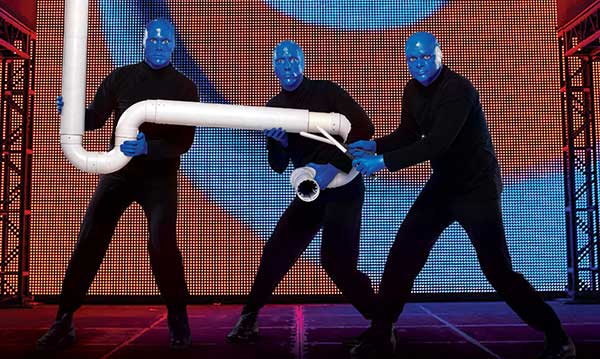 Did the long winter leave you feeling blue? Brighten up your spring with an exciting, colorful, comedic and completely kid-friendly theatrical show by the world renowned Blue Man Group, April 21-26, 2015, at the Fisher Theatre in Detroit. You’ll absolutely want to put this on your list of things to do in Detroit with kids this spring.

Blue Man Group is a group of three bald performers, decked out in all black with the exception of their heads and hands – which are blue.

Performances by the group combine light and color with live musical numbers, theatrics and comedy – with zero spoken language – to produce a bright, entertaining and indescribable show great for theater, music and comedy lovers alike.

The show can get kind of messy for the first five rows or so, in the “poncho section,” and may feature strobe lighting. Be sure to dress for your section and prepare accordingly if have sensitivity to such lighting.

The Detroit performances, which are part of the group’s first U.S. theatrical tour, last about 90 minutes at the Fisher Theatre. Times and dates are as follows:

Visit the Metro Parent calendar listing for more information on the Blue Man Group performance at the Fisher Theatre in Detroit.