Born to Rock: A Guide to Taking Kids to Concerts

Music is in the veins of metro Detroit, but as parents, it's also a big rite-of-passage (not to mention logistical) question: Are you taking kids to concerts – or letting them fly solo? Local moms and dads dish on rocking out. 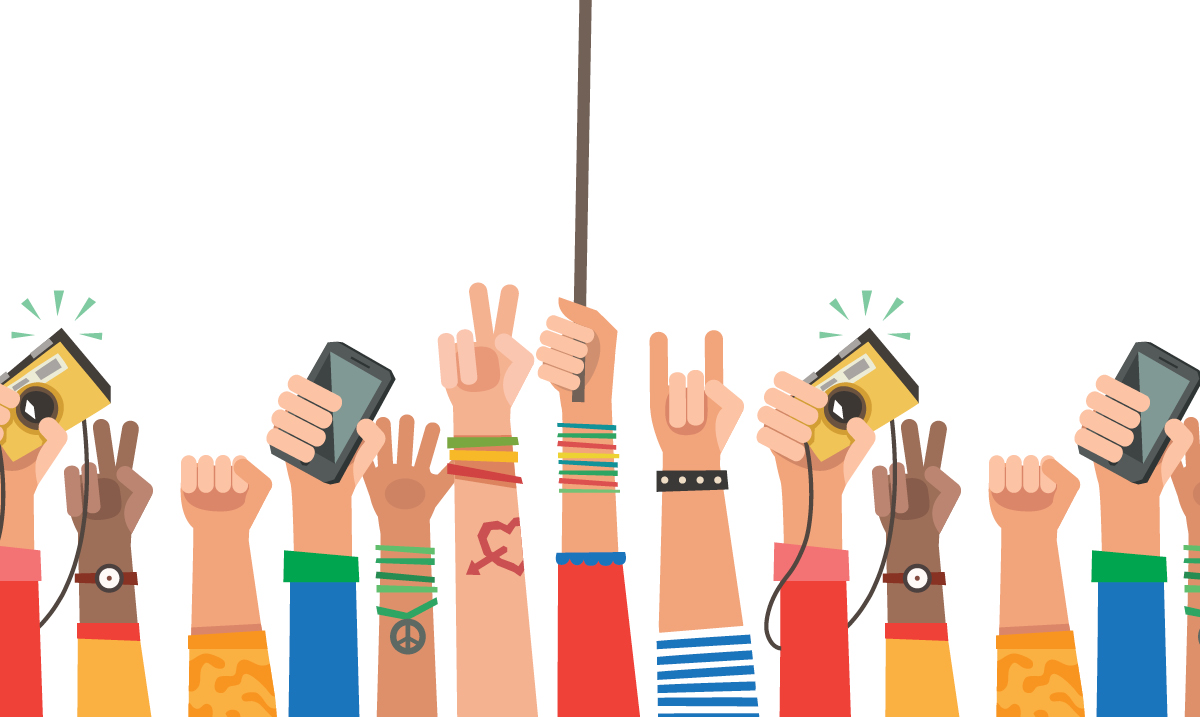 When I was single, I was in a Detroit rock band called The Basements. We played our last gig at my wedding, and after that I hung up my left-handed bass. For a while, anyway.

One day I got a call from Royal Oak rocker Judy Davids, asking me to join her band. The Mydols had started out as “bad mommy” punk rockers. They performed at classic Detroit dives like Lager House, Small’s and The Old Miami, with ironic takes on motherhood like “Never Mind the Laundry” and “Hot Rod Your Home.”

Due in part to their rock ‘n’ roll lifestyle, the band broke up, and Judy was looking to put it back together with a new lineup.

With a toddler at home and baby on the way, I said yes on one condition – that we ditch the late-night bar scene in favor of more family-friendly gigs. She agreed, and together the Mydols wrote an album’s worth of kids songs and booked daytime shows at libraries, outdoor festivals and the Detroit Zoo.

It was a formula with which our friends in Candy Band had found success, and it was kind of “a thing” in the aughts. They Might be Giants, Barenaked Ladies and The Verve Pipe had recently produced kids albums.

Our lead singer, April Boyle, had rallied a bunch of respected Detroit bands to contribute children’s songs for her Family Hootenanny compilation, and Birmingham teacher Mr. Seley was finding fame outside the classroom with songs from his album Eat Your Books (and Read Your Vegetables).

Our plan worked. Parents with the tiniest of tots flocked to our shows, thankful to enjoy live music less bland than Barney.

Eventually, the Mydols moved on to other things, but the rockin’ families who came to our shows continued their concert-going ways. Looking back, I realize you don’t need to “dumb down” music or write special kids songs to reel in families.

Detroit has always been known as Rock City, and in this town, it seems it’s never too early to take your kids to concerts.

It turns out metro Detroit parents are super stoked about exposing their children to live music.

When I posted a callout on Facebook hoping to find a friend or two who frequent gigs with their kids, the comments blew up.

Some said they loved going to concerts before they had babies and didn’t want parenthood to stop them.

Others said it’s a great way to bond with older kids, exploring music their teenagers love or meeting in the middle with a throwback show.

And while there are some downsides to bringing kids to concerts – the crowds, the noise, the potentially bad behavior and language – music lovers have learned to navigate the pitfalls and create memories that last a lifetime.

Amy Estrada of Livonia will never forget going to see One Direction at Ford Field when her daughter was turning 15.

“She was a total fangirl,” Estrada says. “My parents went in on the tickets and we surprised her for Christmas in 2013. She cried and then anticipated it for months. We both loved it. It is honestly one of my favorite memories with her.”

In Wixom, Doug Cloutier finds concerts a way of connecting with his teen.

“I took my son to Green Day for his 16th birthday. It was great,” Cloutier says. “They came out just after I got out of college, and he and his friends found them on their own. It was cool that we both had a different relationship to the music but it was something we could still share.”

And Sherri Baughman of South Lyon says concerts fostered musicianship in both her children.

With her son, Taylor, she has seen Jack Johnson, Sheryl Crow and Colbie Caillat at Interlochen; Foster the People and Kimbra at Detroit’s The Fillmore; and Smashing Pumpkins at the since-closed Palace of Auburn Hills.

“My philosophy when they were young was to expose them to various genres and let them decide where their interests lie,” Baughman says.

Paula Messner of Royal Oak, founder of Candy Band and now leader of Miss Paula and the Candy Bandits, says her kids grew up in the music scene, accompanying her to shows at her hometown’s Arts, Beats & Eats festival and American Idol Live.

One year, during Lollapalooza in Chicago, they saw Devo, Green Day and Lady Gaga – legendary acts they may never get a chance to see again.

“They came to all my shows and kind of took it for granted,” mom says.

These days, they grab tickets all the time and Messner drops them off.

“They love music now. They go to all kinds of concerts. They just can’t get enough,” she says.

Taking children to concerts while they’re young can also help prepare them to handle arenas and crowds in the future, says Alex Lundberg of Farmington Hills.

“I think it’s important to take your kids to shows before they go on their own,” says the father of an adult child. “They’re large, unruly crowds, and parental guidance can show (kids) how to navigate those spaces safely and effectively.”

Not all parents consider concerts family-friendly fare, though, due in part to the cost and unpredictability of the crowds.

Danielle Weston of Brighton says, “I took my boys to a concert one time. They were kind of bored, honestly, and it was expensive. I would try again now that they are older.”

Alicia Norton of Canton says she never felt the need to take her kids to concerts when they were young.

“Too many people and, depending on which concerts, too loud, too many drunks and too many people smoking pot,” she says. “I know I am a minority on this, but I guess now I have teenagers and they are looking forward to going to a concert and truly enjoying it.”

Lisa Hook of Oakland Township has taken her daughter to see Ariana Grande, Iggy Azalea and Justin Timberlake – but not for some time.

“The horrible tragedies began to happen, and she hasn’t been to one since. These days, I’m not a fan of arena concerts. I hate to be a killjoy. I love music and concerts so much, but safety is a huge issue at concerts these days.”

Shelley Van Riper of Northville shares similar fears. She bought tickets to take her daughter to Taylor Swift this August, the day before her ninth birthday, but is having second thoughts.

“I have the crazy panic about a shooter, similar to what happened in Vegas,” she says of the tragic October 2017 killings at the Route 91 Harvest music festival. “I’m not saying it’s rational, but it’s always in the back of my mind.”

Stacy and Dan Jenkins haven’t let anything stop them from sharing their love of live music with their two kids. The Livonia couple’s first date was a road trip to a Grateful Dead show, and they saw Bob Dylan while Stacy was pregnant with their first.

After their children were born, they mastered the music festival scene, blending family vacations with concerts across the country.

“We have music in common, so it was only natural to bring them with us,” she says.

The Jenkins drove an RV to Bonnaroo in Tennessee when their daughter, Abby, was just 3.

They’ve since enjoyed bluegrass together at the DelFest in Maryland’s Allegheny Mountains and explored multiple genres at the Hangout Music Festival in Gulf Shores, Alabama, among many other festivals both local and far-flung.

They learned to make concerts work for them at their children’s different stages of life, bringing toys, staying at the back of the crowds and avoiding the headliners, which tend to go on late and get rowdy.

“There are free or low-cost options to bring your kids to, just to expose them to music,” she says. “Music connects people. It opens your eyes to many different cultures. We love all different genres, and each concert we go to the audience is a little different from the last. It’s all about exposure and making our kids feel comfortable in all of these situations.

“To me and Dan, and to my kids, live music is like food for your soul,” she adds, “There’s nothing like it.”

As summer concert season kicks off, here are some dos and don’ts to think about when taking your kids to a show.

For babies and toddlers

Live music can reach up to 135 decibels of volume, the Hearing Loss Association of America notes. Anything above 85 can cause permanent hearing loss.

With sound bouncing off hard surfaces and roaring crowds, it’s hard to escape excessive noise in indoor venues. Hearing damage is irreversible and cumulative, but even one concert can cause loss.

Everyone should wear earplugs. Try noise-cancelling headphones/earmuffs for babies and children.