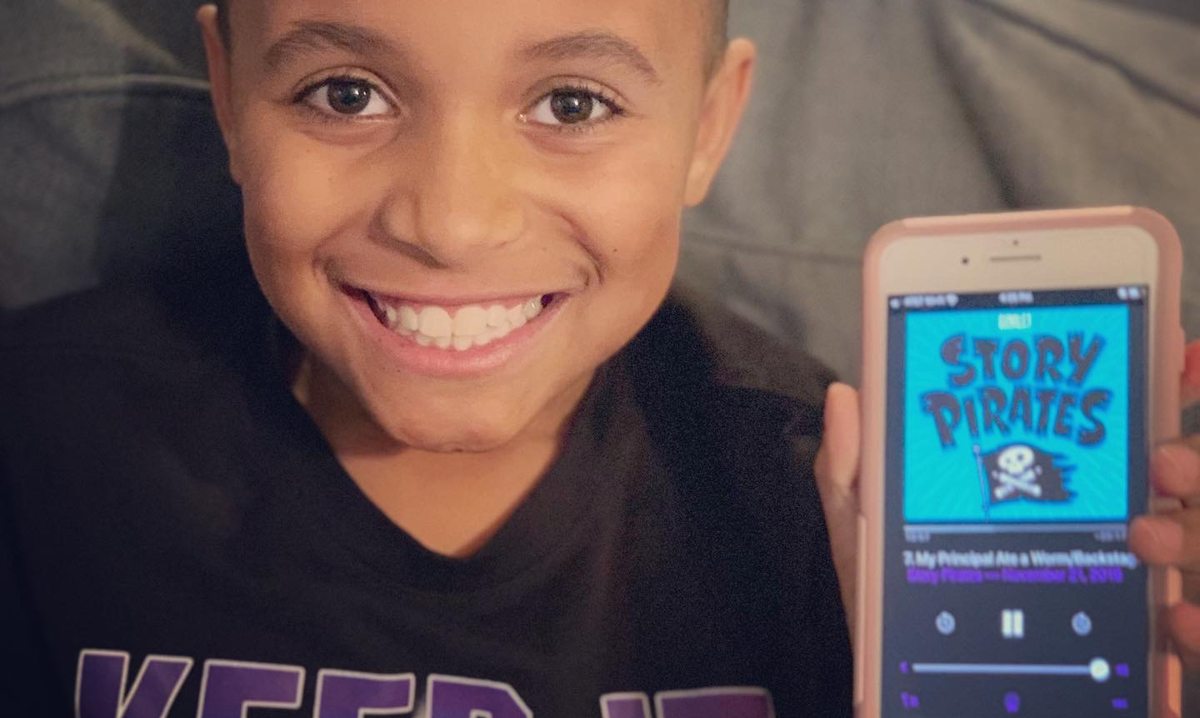 When Jonah Marshall’s principal ate a live worm at an assembly, he thought it was disgusting, but something told him it would make a good story.

9-year-old Jonah from Farmington Hills wrote down his experience in a story titled “My Principal Ate a Worm” and submitted it to his favorite storytelling podcast, The Story Pirates.

“We were all hanging out outside and Jonah went back into the house for about 20 minutes and came back out and said, ‘I wrote a story! Submit it to The Story Pirates!” mom Christianne Marshall says. “He was very confident about it.”

The Story Pirates turn kids’ submitted stories into musical sketch comedy episodes, complete with funny voices and songs. The Gimlet Media podcast was the winner of the Parents’ Choice Award and has been streamed more than 10 million times.

“It’s really funny, because they do silly songs and they have a lot of sound effects,” Jonah says.

Jonah and his two younger brothers and one older brother listen to the podcast nearly every day on the way to school.

“The boys love it,” mom says. “They think it’s so funny. We’ve tried other funny story podcasts, but they don’t like any of them nearly as much.”

Jonah says his story blended some things that actually happened – his principal really did eat a live worm at an assembly – with things from his imagination.

“I mean, who would want to eat a worm? I could see his face. It was like he wished this never happened,” he wrote in his story. “The worms were having a blast at the party in his tummy. They were jiggling and juggling until they ate and ate cake until they fainted.”

“I added the part about the worm party from my imagination,” he says. “I was just trying to make the story fun.

“If the worms had a party, they might need more things, like a worm couch, worm TV shows and a worm house,” he adds. “Plus signs that say ‘$50 to get in.'”

He says his advice to other kids trying to write stories of their own is to not be afraid to add in more details from your imagination to make the story more interesting.

“Use your imagination and your dreams will come true,” he says. “Something that’s not in your life yet can be in your life.”

Since Jonah’s story aired on the podcast, his friends have asked him to help them write stories of their own. One of Jonah’s friends came over for a play date, and the two of them sat down to try to write another story to submit to the podcast.

Jonah says they worked on a story about another school assembly where teachers and the vice principal were turned into human sundaes.

“Everyone was sitting in little swimming pools with shower caps on their heads and I poured melted ice cream on their heads,” he says. They used vanilla ice cream, he says, but Superman ice cream might have been funnier, so he might change it for the story.

He has a knack for telling stories, but Jonah says the only other writing he’s been doing is for lyrics to hip-hop songs he’s created – mostly on the theme of ways of getting out of going to school.

And while Jonah has an abundance of material to write about from his life at home – growing up with three brothers, a dog named Rosie, two fish, 12 chickens and hundreds of bees – for now he’s sticking to his other hobbies like video games and rollerblading.

Listen for new podcast episodes from The Story Pirates in early 2020, and check out its new Creator Club, which offers a magazine and cool insider things for young writers. Kids can submit stories at The Story Pirates’ website.