Bridge to Terabithia at Henry Ford Community College in Dearborn 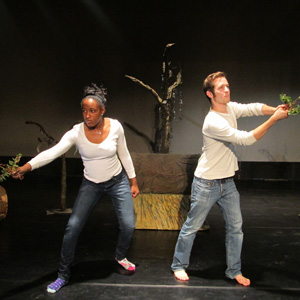 Coming to the stage this winter is the fantastical journey into a make-believe world of imagination and adventure. Bridge to Terabithia plays the Henry Ford Community College in Dearborn Nov. 9-Dec. 1, 2012.

Bridge to Terabithia is the story of two lonely tween children, Jess Aarons and Leslie Burke, who create a fantasy forest kingdom called Terabithia – which only they can enter. The fifth graders visit their make-believe world every day after school, as it becomes their personal sanctuary. The very different kids – Jess is an artistic boy, Leslie is a fearless tomboy – become close and learn much from each other.

The tale unravels into a bittersweet story about grief, facing fears and important life lessons.

Adapted from Katherine Paterson’s 1977 Newbery Medal children’s novel, the story has twice been adapted onto screen, including a popular 2007 live-action Disney film (rated PG). The book, geared at tween readers, frequently appears on lists of challenged and banned books – largely due to some heavy themes, including death and “the occult.” However, it’s a beloved, honest story that has resonated with older kids for a couple generations now, and it’s typically considered appropriate for ages 9-plus.

Performances are at the Adray Auditorium at the Mackenzie Fine Arts Center in- Dearborn.

To learn more about the winter 2012 production of Bridge to Terabithia by Henry Ford Community College in Dearborn, see the Metro Parent listing.