The History of Christmas Characters

This holiday season, teach your kids the history of Christmas characters like the beloved Rudolph, Frosty the Snowman and Santa Claus. 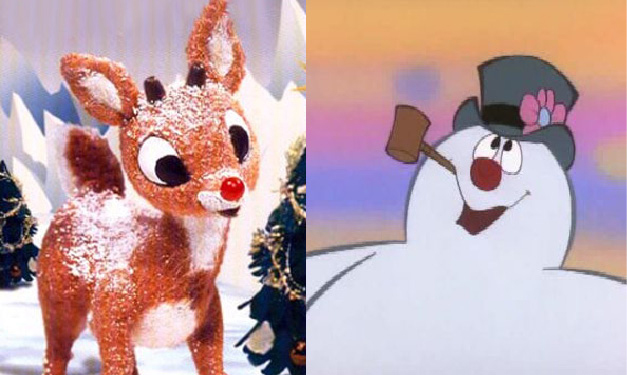 Our Christmas friends reappear every season. They’re on TV and greeting cards, in holiday parades and shopping malls, in picture windows and on front lawns. But what is the history of Christmas characters like Rudolph, Frosty and the Jolly Ol’ Elf? Where do they come from and why?

Their origins involve a stocking-full of advertising-savvy, a sack stuffed with money and a surprisingly large number of household names.

(And for parents who are curious about why parents tell kids about these magical holiday characters, read up on this post all about the myths we tell our kids).

Curious about the origin of Rudolph the Red-Nosed Reindeer? Rudolph was originally the Christmas mascot of Montgomery Ward department stores.

Ward allowed May to keep the Rudolph copyright and in 1948, a nine-minute cartoon was shown in theaters.

The next year, May’s brother-in-law and prolific Christmas songwriter Johnny Marks (“Rockin’ Around the Christmas Tree,” “I Heard the Bells on Christmas Day”) wrote lyrics and a melody based on the Rudolph story. “Rudolph the Red-Nosed Reindeer” sold some 2 million copies.

Besides the title tune, Marks penned a number of its songs, including “Holly Jolly Christmas” and “Silver and Gold” – both sung by the special’s Sam the Snowman narrator, voiced by Burl Ives.

The red-nosed hero got plenty of sequels, too, returning in Rudolph’s Shiny New Year (1976) and Rudolph and Frosty’s Christmas in July (1979).

Here’s the history of Frosty the Snowman: Frosty was introduced in the 1950 song “Frosty the Snowman,” written by Walter “Jack” Rollins and Steve Nelson as a follow-up to “Peter Cottontail,” their successful Easter tune recorded earlier that year.

The tune promptly sold more than a million copies. While considered a Christmas classic, it includes no specific reference to the holiday.

In 1954, United Productions of America (UPA) produced a three-minute Frosty cartoon with a different version of the song.

It was followed by Frosty’s Winter Wonderland (1976) and Rudolph and Frosty’s Christmas in July (1979). Comedian Jackie Vernon provided Frosty’s voice in all three.

The origins of Santa Claus reach to the fourth century, when Nicholas, Bishop of Myra in present-day southern Turkey, devoted his life’s work to helping the sick and suffering, especially children.

Over the centuries, stories of St. Nick’s kind deeds were told in Europe, along with the custom of giving kids small gifts on his feast day, Dec. 6.

Clement Clarke Moore’s poem “A Visit from St. Nicholas,” published in 1823, cemented the chimney entrance while introducing the sleigh and flying reindeer.

Based in part on Moore’s descriptions, artists began portraying St. Nick with a beard, jolly rotund figure, fur-lined suit and hat, and a pipe.

By the 1920s, artists like Norman Rockwell, famous for his Saturday Evening Post covers, had settled on red as the preferred color of Santa’s suit.

Santa’s pseudonym, Kris Kringle, is a phonetic alteration of Christkindl, which means “Christ Child” in German. The Christ Child offered gifts to kids on Christmas Eve; German immigrants brought the tradition to America in the early 1800s.

The roles of Kris Kringle and St. Nick intertwined over generations into a single image. The 1947 film Miracle on 34th Street greatly enhanced the use of Kris Kringle.

In the late 1800s, “goody” was a contracted form of “good wife.” George Melachrino and His Orchestra furthered the image by recording “Mrs. Santa Claus” in 1956.

Which of these holiday characters is your family’s favorite? Are there any others you love that have interesting origins? We’d love to hear about them in the comments.