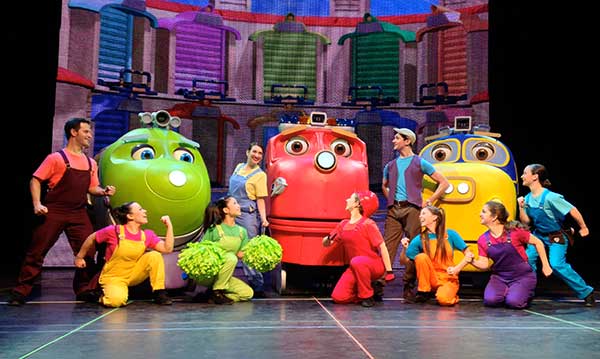 Is your child fascinated with toy trains? Or maybe he or she loves the hit kids show Chuggington, featuring animated, talking trains? Either way, you can chugga chugga choo-choose this fun Fox Theatre Detroit event for some spring family fun.

The popular TV series transforms into one of the hit touring kids musicals in Detroit this year. Chuggington Live! The Great Rescue Adventure plays two special shows at the Fox Theatre Detroit on Sunday, April 12, 2015. This live-action stage performance draws its inspiration from the children’s show, which commonly appears on Disney’s channels.

Not familiar with the show? Here’s a quick synopsis. Chuggington is a train town where all trains come to life. In this world of trains, little “trainees” Wilson, Brewster and Koko are learning how to ride the rails – whether through storms, mud or other track trouble. Launching just five years ago on Disney Junior, Chuggington is now global with a whopping 2 million viewers per week.

Kids can join in the excitement, riding the rails from their seats with animated locations and background action right from this TV series, on a giant LED video wall. They can also sing along during this two-act musical. Let your little one experience the adventure with the trainees!

In this brand-new tale, the trio of trainees is working on their skills to show off to their mentors. Later they learn that Koko is in trouble at Rocky Ridge Mine. Do Wilson and Brewster have what it takes to use their skills to save their friend?

VIP tickets are available, too, and come with a Chuggington Live! goody bag, which includes stickers, a postergram, paint-with-water coloring page and many more fun crafts for kids to explore after the curtain closes. When it comes to touring kids musicals in Detroit, this is definitely a train to catch.

For more on Chuggington Live! The Great Rescue Adventure at the Fox Theatre Detroit in 2015, see the Metro Parent calendar listing.