Clowning Around With Rosco the Clown 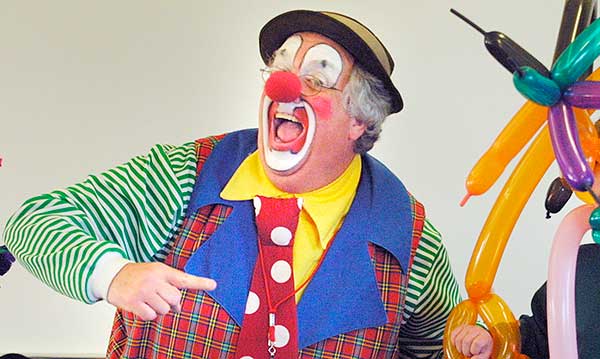 What has a big red nose, a polka dot tie and loves to make you laugh? Rosco the Clown! This master of hilarity has been boppin’ around Macomb, Oakland and Wayne counties – bringing grins and glee to kids ages 1-100 – for decades now. A clown about town, he’s a staple at loads of family events. And, with National Humor Month upon us, we began to wonder: Who is Rosco? That would be Ross Champion of Mount Clemens. We chatted up this goofy guy for silly scoop!

Years ago, our pal Rosco was all about shrubbery, gardens and sprinklers. That’s right: Champion set off for Michigan State University to study lawn maintenance and landscape construction. No kidding! Two weeks in, he saw an article advertising classes for clowning basics at Lansing Community College.

“You could learn whatever you enjoyed.” Ten weeks in, “I decided that I wanted to be a clown.” Well, first, he was a landscaper. But about 15 years ago, with the support of his wife and parents, Champion sold his garden center and became Rosco full-time. “That sure got the eyes rolling!” he laughs.

When he’s not playing Rosco, you’ll find Champion, 58, in his Mount Clemens community. He’s served on the city’s education board – ditto the Macomb Family YMCA. Heck, he’s even president of the Macomb County Historical Society.

He and wife Julie, a naturalist at Lake St. Clair Metropark, don’t have kids, but both spend a lot of time working with them. Rosco also helps with Macomb Literacy Partners, an adult reading program. Champion still loves landscaping, but his biggest passion is being Rosco. “Ross is a big part of Rosco and vise versa.”

A clown is born

As you might’ve guessed, Rosco is a play on Champion’s name, Ross. “The instructor went around the class and asked for a good name for a clown,” Champion explains. After getting “Sunshine” and “Bozo,” the teacher suggested adding an “o” to their name. “I just added a “co,” he says.

Rosco is an Auguste clown, or “a rumbly, stumbly, crazy clown.” He likes to dress in very loud and bright colors. “I love the red tie with the polka dots with the white and black checkered pants,” Champion says.

A show with Rosco involves tons of clowning around – and getting as many people involved as he can. He does impromptu jokes, visual gags, magic shows and balloon animals, including a turtle kids can wear on their noses. What he’s best known for, though, are his taglines – wacky phrases. He isn’t sure where most even came from, but “folks have come up to me and repeated the lines for years.”

Once, while he was doing a festival in Gaylord, someone in a truck waved at him. Champion rolled his window down in time to hear, “Everyone in the pool!!” – a line he usually shouts after blowing a whistle (and, normally, when there’s no pool in sight). “It’s so absurd that people just laugh,” he says.

Clowns can have a bad rap with some tykes. So what does Rosco do when he finds a scared kid? “I go the other way,” he says. “I found over the years that if someone is afraid, the worst thing that you can do is get up in their face.” Instead, he hides from them – and pretends that he is afraid. Within a few minutes the kids usually warm right up.

“I love making people laugh, and laughing is so good for you,” Champion says. Get your chuckles at roscotheclown.com – or at one of Rosco’s public events.

Ring in the school year and kiss summer goodbye at one of these Labor Day events happening in Macomb, Oakland, Washtenaw and Wayne counties in 2022.
Read more
At Home

Canning or otherwise preserving food can extend the shelf-life of your produce but it's important you do it safely. A Macomb County food preservation expert explains.
Read more
Parenting

Three’s a Crowd: How Modern Motherhood Forgets Parents of Multiples

A local mom of twins discusses her experience raising kids in a world that favors moms of single children.
Read more
Attractions

Family Days at Local Museums and Other Attractions

There's no better time to visit local museum, park or other attraction than on kids' day!
Read more