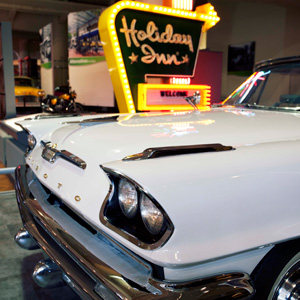 Photo courtesy of The Henry Ford

Trust Henry Ford's legacy to get it right. If you like driving cars, admiring 'em – heck, even if you've ever simply ridden in one – the Driving America exhibit at the Henry Ford Museum is a must-see!

Driving America is a brand-new, 80,000-square-foot exhibit with 130 vehicles, 60 cases of artifacts and 18 interactive touch screens. It'll be on display permanently starting Sunday, Jan. 29, 2012 at the Henry Ford Museum in Dearborn.

"Driving America is more than an exhibition with cars on display," says Patricia Mooradian, president of The Henry Ford. "It is really an interactive, state-of-the-art story of us – us as drivers, consumers and enthusiasts. It examines the car as an innovation and explores how it has changed almost every aspect of our lives – and heavily influenced the decisions we make.

"It is an exhibition that resonates with us all and it will challenge us to think differently about what we drive."

Wow! If that's not enough, you'll also definitely find some pretty hot cars, including a 1896 Duryea, the last example of America's first production car, a 1865 Roper, the oldest surviving American car, and a 1931 Bugatti Royale – the third of only six that were built.

Want more? How about century-old electric cars, current hybrids, muscle cars, racers and modern-day SUVs – covering everything from hot rods and road trips to road food and racing? You'll find it all here!

Check out the Metro Parent listing to discover more about the Driving America permanent exhibit at The Henry Ford in Dearborn, kicking off in 2012.