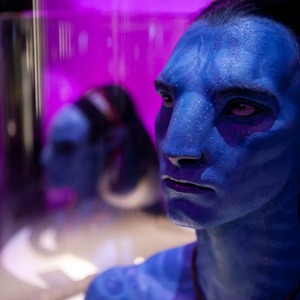 In the major motion picture Avatar, a paraplegic Marine named Jake Sully takes his now-deceased brother’s place on a special mission to the world of Pandora. The story, which takes the viewer on a journey through this world inhabited by Na’vi, is captivating – and not surprisingly, one of the highest grossing films of all time. Now, that same story is now coming to the Henry Ford Museum of American Innovation in Dearborn for James Cameron’s AVATAR: The Exhibition, kicking off on Oct. 26, 2013 and continuing until Jan. 26, 2014.

It’s a behind-the-scenes look at this blockbuster hit, which features props and costumes from the movie, along with cool interactive features.

Through the exhibit, you’ll get a closer look at the making of this James Cameron film and experience the technology used to bring Pandora to life. Use a virtual camera to shoot a computerized scene, create your own plant life based on the same principles used in the film and much more, thanks to the interactive displays.

Kids and parents can even have a seat in the director’s chair – as they shoot a scene with the same digital files used to create the film.

Also opening on Oct. 26 and running in conjunction with the exhibit is AVATAR Special Edition: An IMAX 3D Experience. Catch the movie again, but this time on Michigan’s largest screen.

The exhibit is open to all ages, but may not be suitable for kids under age 4.

See the Metro Parent listing for more information on James Cameron’s AVATAR: The Exhibition at the Henry Ford Museum of American Innovation in Dearborn.