These multi-day megathons of kid craziness can challenge any mom and dad. Conquer the night with insider tips from some veterans. 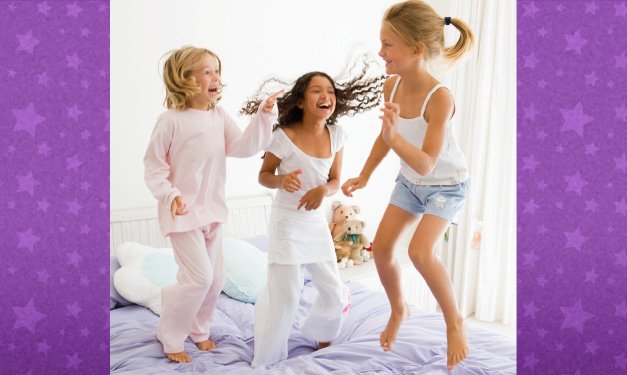 Cheryl Lynn Pope admits she was in over her head with her son’s slumber party. Keeping 10 kids ages 5 and 6 happy and entertained exhausted her. “I didn’t even wait for the parents to come pick them up the next morning,” says the Detroit mom and author. “I took them all home myself!”

Years later, when planning her daughter’s eighth birthday party, she didn’t make the same mistakes. Pope had plenty of activities, from the tea party in tiaras to venturing to McDonald’s for breakfast. The kids were older, which helped. But, most important, she had her daughter invite fewer guests.

Slumber parties present some unique challenges. Unlike a standard birthday soiree, these bad boys can eat up an entire weekend – and your house is the sole option. But with a little know-how, you can have a successful slumber party for your child – one that will make the day (and night!) a blast for all.

With regular shebangs, you might be able to invite your child’s entire school class. But with slumber parties, you’re limited to floor space and a group of kids that really get along. After all, they’ll be at your place for two days!

“We’ve learned that smaller slumber parties really are better,” says Bill Furtkevic, the vice president of marketing for Party City and a father of five. “Honestly, (more than four children) results in too many distractions – which leads to a poor night’s rest. The smaller the group, the better!”

Growing up, Tara Lindsay of Troy recalls the house rule was you could invite as many kids to your slumber party as you were turning in age. So, for an 8-year-old, eight guests. But Lindsay, who’s now a nanny and co-founder of the Michigan Professional Nanny Association, says the number of guests “depends on your kids and your kid’s friends.” In fact, like Furtkevic, she recommends having a limited guest list – two or three close friends.

Don’t make the mistake – no matter how old your child is – that the kids will happily “hang out” while they’re staying over. Plan enough activities for the evening and morning. Then, as the party progresses, keep doing activities that hold your guests’ attention and throw out those that don’t.

Your plans don’t have to be elaborate or strictly scheduled – but have a general idea what the kids will be doing at each point in the party. Lindsay suggests as many hands-on activities as possible, whether board games or projects. For example, make or buy cheap pillowcases for each guest and give kids time to decorate them and write on each other’s. They can sleep on the pillowcases that night and then take them home as party favors.

Of course, you can plan time for the kids to just come up with games on their own, or if they’re older, hang out listening to iPods or talking, but don’t rely on those activities taking up the bulk of the time.

Another reason for planned activities is to avoid kids breaking off into groups at the exclusion of other children or coming up with activities on their own that aren’t appropriate. To avoid these problems, Lindsay suggests that you invite, when possible, an even number of guests.

She also advises that, before guests arrive, you go over the house rules with your child. Explain that the rules apply to everyone, not just your child. Let him know he needs to be a leader among his friends for the evening.

Slumber parties are notorious for pranks. You can avoid this pitfall, too, with activity that might feed that need. For instance, having a brief pillow fight might satisfy potential mischief-makers.

Just remember: Movies, a slumber party staple, aren’t guaranteed to keep attention. Guests may’ve already seen the flick or simply grow bored. Save it for the end of the evening: Have the kids in their sleeping bags before you turn on the show and then encourage them to fall asleep to it.

Planning slumber parties for boys can be quite a bit different than for girls. For one, you usually don’t call it a “slumber party,” explains Furtkevic – it’s a “sleep out.”

Pope was able to plan a whole party theme around princesses for her daughter. The girls played with makeup, had tea and had dress ups – definitely not activities that you’d do with a group of boys.

Planning activities, no matter the gender, takes just as much time. It’s just a matter of tapping into what will interest your child and his or her friends. Not every girl wants to spend her party time putting on make up, just as not every boy is content to play superhero for hours on end.

For his son’s 13th, Furtkevic and his wife planned a luau party, complete with decorations, leis, sunglasses for the crowd and plenty of activities involving water guns and water balloons.

“The whole thing was terrific fun,” he says. “In my personal and professional experiences, boys’ slumber parties and girls’ slumber parties require the same amount of detailed attention to make the event special. After all, what child doesn’t want to be treated and made to feel special?”