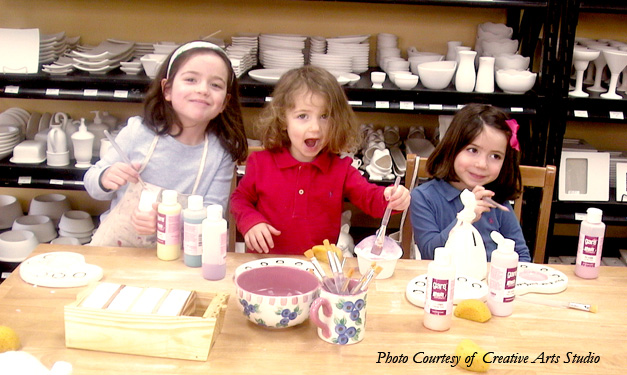 Parents planning a kid’s birthday party know the a golden rule: The kids cannot be bored. That can lead to whining, fighting and a generally bad time for all – including moms and dads. That’s why make-and-take parties are so popular.

All over southeast Michigan, kids are painting pottery, designing beaded jewelry and more as part of their celebration. And why not? Make-and-take parties let parents host a shebang outside of their homes (read: no clean-up) and provide an activity to keep kids entertained – plus a goody to go.

Bonus: Make-and-take parties are known for being all-inclusive. They’re just the thing to get little wallflowers involved with the whole crowd.

Here’s a peek at a few local make-and-take hot spots, and their “take” on why this soirée style is sure-fire. (And they’re not the only ones! Check out our Kids Parties directory for loads of options throughout the region.)

“I think that creative outlets are a great fit for kids just because it gives them an opportunity to try something different,” says Toni Davidson, owner of The Fashion Factory Sewing and Design School. Their mobile birthday parties allows guests ages 7 and up to sew their very own accessories, skirts, PJ pants and more – with parties all led by an instructor. Especially now that schools don’t always have the funding to teach skills like sewing, it allows them to “just try it and see if they like it.”

She notes it can be a feel-good experience because the instructors are positive and encouraging, helping kids who have anxiety or are apprehensive of trying something new.

Easy on mom and dad

“What I like about it is that you can bring (your) kids and their friends for something, but you don’t have to know how to do it,” Davidson says. In that way, make-and-take party options are easier on mom and dad.

“(It’s) a no fuss kind of day,” she says. Instead of stressing about entertaining a whole group of kids, they can focus on their kid having a good time.

The more, the merrier

Visions of a throng of sugar-buzzed children are enough to give most parents pause. But that’s not an issue at places like The Bee’s Knees in Northville, home to parties focused on pottery-painting, mosaics, glass-fusing and more.

Roni McCrumb, an employee with The Bee’s Knees in 2010, said they excel in large groups – the kind that would intimidate parents at a home-hosted party.

How? “We’ve had a group of 15 to 18 Girl Scouts,” McCrumb noted. “We break them up into groups of five or six. One group works on rolling the clay, while another group works on pinch pots and another on coil pots.”

It requires a mastery of organizational skills to make these events work even under the most chaotic circumstances. McCrumb said owner Lori Dow knows when to call in the troops – or, in this case, college art students, who help kids in larger gatherings with their art projects. “The parents love it because there is no muss, no fuss,” McCrumb says.

For girls and boys

And don’t be deceived into thinking that make-and-take parties are best for girls. Guys can definitely get in on the activities.

For instance, Creative Arts Studio in Royal Oak offers lots for little tough guys, says owner David Fredenburg. Although they may not be interested in making jewelry, pottery painting is fun for boys, too.

“Boys particularly like the clay football helmets and robots that are ready to be painted and fired later,” he says.

Wheel throwing, in which the guests spin pottery wheels to create pottery objects, is popular with both boys and girls of all ages, he adds.

But whether kids make mosaics or paint pottery, make-and-take parties are high on entertainment for kids – and low on energy investment for the parents!