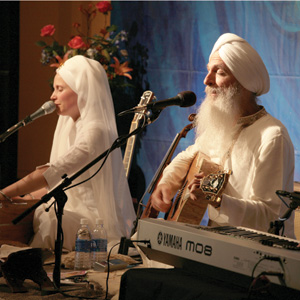 "Soothing, relaxing family concert" are words rarely strung together, but Snatam Kaur offers something different from the typical song and dance.

Kaur's evenings of kirtan (sacred call-and-response music), singing and dancing give families a chance to reconnect with themselves and each other, winning Kaur a devoted fan base ranging from toddlers to Oprah Winfrey.

The internationally acclaimed musician's tour stops in Michigan for a Karma Yoga-hosted Mother's Day concert May 12 and an "Into the Heart of Chanting" yoga workshop on May 13. Musicians Todd Boston (flute and guitar) and Ramesh Kannan (percussionist) accompany Kaur; both events will be held at Seaholm High School in Birmingham.

Kaur aims to "empower" her audience rather than perform for them, she says. On a small scale, the soothing movement and rhythms can help people sleep better at night. On a large scale, they can "take your life to the next level," Kaur says. People want more than the current self-help emphasis on weight loss and prosperity.

"People are saying 'OK, great, thanks for all the information – but it's still not doing much for me on a personal level,'" Kaur says. "People want to go deeper and find the intrinsic happiness that lies within. I feel it in every concert. A very deep personal transformation happens."

Kids also like the music and movement, Kaur says. Her abundant musical productions include a children's album with songs like "I Am Happy, I Am Good" and "Feeling Good Today."

Her concerts are "a very sweet experience for families."

Kaur grew up in a Sikh community in California where chanting mantras, kundalini yoga, activism and community service were a part of her upbringing. Now 40, Kaur spends much of the year touring, singing and teaching yoga. She goes on the road with her husband and their toddler.

Katherine Austin, owner of Karma Yoga in Bloomfield Township, says she plays Kaur's music in her classes. Bringing her to Detroit for two powerhouse events was a no-brainer, as Austin finds Kaur's music, message and presence transformative.

"I wanted our community to receive Snatam Kaur's beauty, light and grace," Austin says. "She truly allows the healing power of these mantras to come through in their purest form."

Snatam Kaur will perform a Mother's Day Concert 7:30-10 p.m. on Sunday. She will teach a yoga workshop with live music at 6-9 p.m. on Monday.

Tickets can be purchased online at spiritvoyage.com or at Karma Yoga in Bloomfield Township. Purchased at the door, concert tickets are $45/adults and $10/children under 12; workshop tickets are $75/adults and $20/ages 12-18.

See the Metro Parent listings for more on the Snatam Kaur Mother's Day Concert and the "Into the Heart of Chanting" yoga workshop.

Parents of children with special needs in metro Detroit and Ann Arbor can plan ahead for fun activities that are tailored to meet their needs.
Read more
At Home