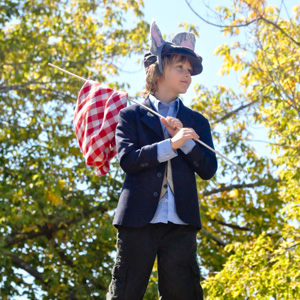 The curious story of an exceptional mouse is coming to the stage for the Ann Arbor Civic Theatre's Junior Theatre production of Stuart Little Nov. 8-11, 2012.

The stage version of the classic story by E.B. White follows the story of a small "boy" with a big heart. Stuart Little was born to human parents but looks strangely just like a mouse. While his parents accept him as he is, Stuart nonetheless feels an urge to explore the outside world and safety of home.

On his adventure into the world, he meets plenty of people and animal friends along the way – and learns a bit about himself, belonging and family.

A2CT director Ariel Jones says that Stuart Little was one of her favorite books as a kid. "The characters are wonderful, the adventures are exciting and the idea that a little guy takes on the big world is timeless.

"I couldn't have a better cast than these 18 young actors who bring the story to life," she adds.

The Ann Arbor Civic Theatre was founded in 1929 and has performed hundreds of shows in different venues over the decades.

This show is at the Washtenaw Community College Theatre, in its Crane Liberal Arts & Sciences Building.

Show times 7:30 p.m. Thursday-Sunday, plus a matinee time of 1 p.m. on Saturday-Sunday. Tickets are $8/adults and $5/children and can be purchased by calling in advance – or at the door 45 minutes before performances.