Wicked at the Detroit Opera House 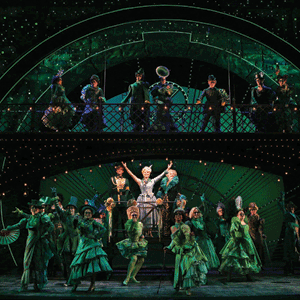 The award-winning show Wicked returns to Detroit, Dec. 10, 2014-Jan. 4, 2015, to give theatergoers a glimpse at the events that took place before Dorothy and Toto landed in Oz. Head to the Detroit Opera House to witness the story of two young witches who meet and start an unlikely friendship.

Prior to becoming the Wicked Witch of the West, Elphaba was the awkward but intelligent girl with emerald green skin and long black hair. And Glinda the Good Witch was Galinda, one of the prettiest and most popular girls.

Their unlikely friendship ends when girls both fall in love with the same man. A few dastardly characters, such as the titular Wizard and Madame Morrible, the woman responsible for the cyclone that brought Dorothy to Oz, don't help mend the rift between these unlikely friends. Want to know what happens next? See it live. The show, which runs 2 1/2 hours, depicts the series of events that led the women to opposing sides – and, ultimately, to the demise of the Wicked Witch of the West.

This critically acclaimed show is based on the novel Wicked: The Life and Times of the Wicked Witch of the West, written by Gregory Maguire, and has won over 50 major awards. It was even declared "The Best Musical of the Decade." Take the entire family, learn the story behind the two classic faces, and find out what all the buzz is about.

For more information on Wicked at the Detroit Opera House, see the Metro Parent calendar listing.