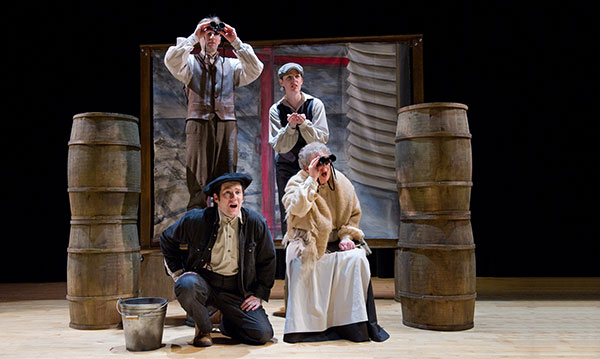 All aboard! Join Aaron Buchanan – a 12-year-old boy – on his journey as he sails the waters of Lake Huron with his parents while transporting Christmas trees from Sault Ste. Marie, Michigan.

The trip, however, wouldn’t be a drama if everything stayed in calm waters. Your kids will be on the edge of their seats as they watch the Buchanans try to make it through Thunder Bay’s infamous “Shipwreck Alley” in Shipwrecked! at the Towsley Auditorium in Ann Arbor, March 9-12, 2016.

Wild Swan Theater performs this show, and although this tale – written by playwright Jeff Duncan – may be set in 1893, the general theme of the play is applicable to today’s younger generations, as well. Young Aaron Buchanan will teach your little ones that with bravery, perseverance and determination, all things can be conquered – even life’s greatest storms.

Children in grades 3 and up will also get a better understanding of Michigan’s history, geography, music and maritime heritage, because this play is based on historical accounts of the period. You might want to get a sitter for the wee little ones, though, because this content might be too much for them to fully grasp.

Don’t miss out, and see what happens to Buchanan and his family at this thrill-filled show!

Show times for this play are as follows:

Get your tickets right away – and see the Metro Parent listing for more on Shipwrecked! at the Towsley Auditorium in Ann Arbor.

This post was been updated for 2016 by Megan Krueger.