Winter Sports for Kids: Figure Skating and Curling for Kids

Take a cue from the Olympics (even in the 'off' years!) and try these winter sports for kids. Figuring skating and curling are two great options. 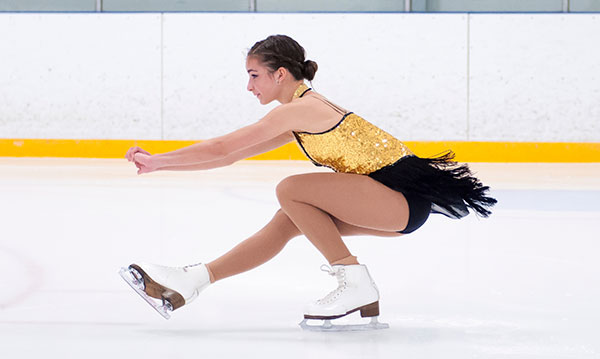 Winter sports for kids offer plenty of fun and action during those chilly cabin fever months in southeast Michigan and, in some cases, anytime of year.

While we’ve got a ways to go before the next Winter Olympics, heading to Beijing, China in February of 2022, kids can still draw inspiration from – and try out a couple of – its iconic sports right now. Namely, figure skating and curling.

Want to know a bit more about these two wintertime activities – and how your kids can get involved if they want to be future curlers or skaters?

Get the scoop on these winter sports for kids from insiders at two southeast Michigan spots: the Detroit Skating Club in Bloomfield Hills and the Detroit Curling Club in Ferndale.

The twirls, jumps and those beautiful costumes make figure skating a fan favorite. And this popular sport draws plenty of kids, sometimes by watching Winter Olympics or visiting the latest Disney on Ice show.

Skaters from the United States, Canada, Italy, Australia and Japan have practiced hard here for about eight hours a day all year, says Rachel Bauld-Lee, director of skating and the ice show and a national resident coach at DSC.

If your child gets the urge to strap on skates and learn how to mimic the pros, he or she can start classes at the DSC as young as 2, Bauld-Lee says. Although most kids start at 5 or 6, there are benefits to starting early.

“We would love to get them in while they’re in preschool because they have less fear,” she says – especially of falling – and they’ll progress faster.

Parents and kids should know that “falling is how you learn” in figure skating, Bauld-Lee adds, and that even the experienced skaters fall.

To start, “There’s not much they need to buy except skates, and they can rent skates if they wish. But everything else they probably have at home,” she says, like gloves, coat and a bike helmet.

There are a variety of skating levels and rates at DSC, including beginner; membership fees also apply. But if your child has never skated before and just wants to get a feel for it, open can skate runs 12:30-2 p.m. Saturdays for $5 – plus skate rental if needed.

If your child is bringing his or her own skates for open skate or for classes, Bauld-Lee recommends single-blade skates – never double, as they make it more difficult to skate.

Keep in mind, ice skating doesn’t just fit the “winter sports for kids” category. In fact, for competitive skaters, the “in-season” is May-October, Bauld-Lee says. In order to allow kids to progress in their skill level, DSC offers skating all summer and hosts a summer skating camp, too.

Next time you watch the figure skating portion of the Winter Olympics on TV, try counting how many times a skater spins around. For the long program, which runs four minutes and 10 seconds for the women and four minutes and 40 seconds for the men, skaters are required to complete three spins, Bauld-Lee says. Women have to jump seven times and men have to jump eight, she adds.

Learn more about the terms used in figure skating, as well as the history and equipment used, on the Olympics website. Plus, check out the Metro Parent roundup of indoor and outdoor ice skating rinks in southeast Michigan and Grand Rapids to discover additional open skate times and other learning opportunities near you.

Maybe you’ve watched curling – that sport where participants throw granite rocks down sheets of ice, gliding toward a target, while somebody uses a broom to sweep the ice in front of the rock – but didn’t know much about it.

It’s perhaps lesser-known than figure skating, but it has deep roots – and another great option when it comes to winter sports for kids.

“While the sport may be new to people who are watching the Olympics, it’s actually a sport with a long tradition – especially in Detroit,” says Natalie Wilson of Huntington Woods, who used to curl at the Detroit Curling Club in Ferndale with her son, Adam. In fact, the very first curling club in the United States was started in 1831 at Orchard Lake, DCC’s site notes. The Detroit Curling Club itself has roots dating back to 1840.

Every team is composed of four players, and each has a different role. The goal is to send granite rocks to the target or “house.” Teams alternate throwing a total of 16 rocks a game, and the team gets one point for each rock that lands closest to the center of the house.

The game is divided into “ends,” similar to innings, and only one team can score in an end. Sometimes, teams don’t want to score, Wilson notes. “So it’s not just a race to how many people can hit this target; there’s a bunch of strategy.”

So where do those brooms come in? The sweeping with what looks like a push broom – but are actually high-tech, specially made brooms – makes the rock go faster and straighter, Wilson says. “It’s difficult to get all the factors together,” she says.

Visit the Olympics website for some history and a glossary to learn more about the game and lingo. You can check out all the rules and basics of game play on the Curling for Dummies webpage.

If watching this sport on TV during the Winter Olympics with your family, Wilson suggests keeping in mind that even to get into the Olympics, teams had to prequalify. So players worked really hard to make it. Look to see how each of the team’s four players plays differently. “Just remember they’re not all trying to do the same thing,” she says.

After watching the Vancouver Olympics in 2010, Wilson says her son was interested in trying curling – and, at 12 years old, was finally able to start in November 2013.

If your child is 12-plus and has a similar experience after watching the games, Wilson notes the sport is accessible. All you need to start are athletic shoes and a sweatshirt, gloves and a hat. The Detroit Curling Club has equipment to rent, including grippers made of Teflon for shoes so the slippery ice won’t be a problem.

Beginners will want to sign up for “Learn to Curl” classes with the DCC. For more information and to register, visit the DCC’s website.