Mom and Dad Owners of Vinsetta Garage and Union Woodshop

Curt Catallo and Ann Stevenson own some pretty hip eateries, including Vinsetta Garage and Union Woodshop. Learn about their eats and how their legacy came to be. 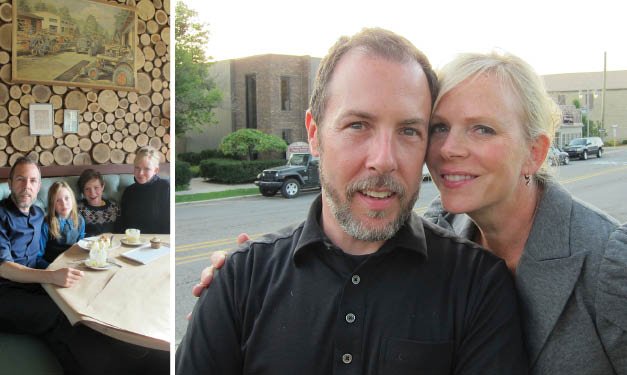 When it comes to crafting delectable eats at hip restaurants nestled in re-invented old buildings, Curt Catallo and Ann Stevenson are local heroes.

And, besides having the “most macked” mac ‘n cheese in metro Detroit – and making our list of top family restaurants in Detroit from A to Z – they know the trick to a quick ‘n happy family photo shoot.

“We bribed the kids with the featured desserts!” says Curt.

This mom-and-dad team definitely has full plates. They own the popular Clarkston Union and Union Woodshop restaurants in downtown Clarkston – plus the Fenton Fire Hall and one of the hottest-table-in-town restaurants Vinsetta Garage in Berkley.

As for juggling their other jobs – Ann runs the Union General Store, a modern take on the traditional gathering spot adjacent to the Clarkston Union, while Curt heads Union AdWorks, a busy advertising shop – with raising Cassius and Cosima? Well, this duo walks that line with such flair that they make it look easy and, dare we say it, fun.

“We have a shorthand,” as Ann puts it, “and we have a forgiveness for how short the shorthand can get.”

Oh, and did we mention they literally live above the store?

It’s a recipe that’s just right for them. For one thing, both love what they do, so shoptalk at the dinner table is just fine, Curt says. And they’ve been together so long (they met at college in Vermont at age 18 and have been married more than 15 years), they grew together as business owners, Ann adds.

“We’re sometimes the most finely tuned critic for how we’re doing things business-wise,” she says, “but we have a lot of confidence in each other, and tend to work pretty well together.”

Their kids are in the thick of it – and it’s made them adaptable, adventurous and, especially, feel like a part of their parents’ work life.

“Those lines between work and home aren’t as clear-cut as a typical family, but I think it works for us,” Curt says. “It’s a throwback thing for our kids, like if they were to grow up on a farm – except instead of a farm, it happens to be a restaurant and store.”

And their tweens have been in pretty much every industrial-salvage shop in Minnesota, Chicago and Detroit. “It’s given them an appreciation for the process of what goes into what we do,” Ann says. “They’re used to dealing with a lot of different types of people, because that’s the nature of our work.”

Neither had any burning restaurateur ambitions back in 1995, when the opportunity came to open Clarkston Union. The building had been a Baptist church, and Curt’s parents wanted to keep it from falling into disrepair.

“My parents bought it without really knowing why they needed it,” Curt recalls. “Everyone thinks they can open a restaurant, and we were no different.”

Ann had waitressed on school breaks, but Curt “had maybe made a burrito once in his life,” Ann says (and Curt corroborates). So they leveraged their strengths to create the unique feel of each restaurant. Ann’s aesthetic sense shines, particularly in the charming touches. For example, at Clarkston Union, many seats are old church pews, and one wall sports a bingo board.

At Vinsetta Garage – a Woodward Avenue icon and, its website declares, “the oldest garage east of the Mississippi” – the vestibule’s walls are lined with old repair slips left behind (Curt had an ad intern carefully conceal all the hand-written telephone numbers). Hosts and hostesses manage the throngs waiting for tables in what was once the garage manager’s office, complete with vintage desks and chairs.

Curt, for his part, plays host, greeting guests and making sure everything runs smoothly. And, says Ann, he’s come a long way: Pops is now very knowledgeable about food and what people want to eat when they go out. Their eateries are famous for that mac: All the restaurants have it, and if it’s not the best on the planet, it’s hard to imagine better. You might call their style American classics that go beyond the expected: Think burgers made from succulent duck or a meatloaf featuring house-ground beef.

Each time they’ve moved a business into a new space – from the early days creating the kind of place they’d like to hang out at in Clarkston Union to the blue-collar beauty of Vinsetta – they were drawn by the building.

“We both had the experience that some of the most precious moments from childhood were exploring and finding something sort of magical,” Ann says. “This is sort of an extension of that. We’re taking a building that has a very specific intent … and we’re intent on repurposing it.”

They’re not creating museums, though – or turning that original intent it into a kitschy theme. Instead, they tip their hats to what came first, while creating something fresh.

“There’s something very playful about that; something we both get a kick out of,” Ann says. “We’re not preservationists, but we believe in honoring the craft of people who worked in the building – its soul and its history.”

Learn even more about the Union Joints businesses, too.

Have you ever eaten at these local restaurants? Share your experience in the comments.

This post was originally published in 2012. It is lightly updated on occasion but primarily reflects a snapshot of that year.

Find something funky to see this year at these weird roadside attractions in Michigan.
Read more
Sponsored Content