The PuppetART Detroit Puppet Theater offers unique stage puppet shows for metro Detroit families, kids and parents, plus workshops and some history, too. 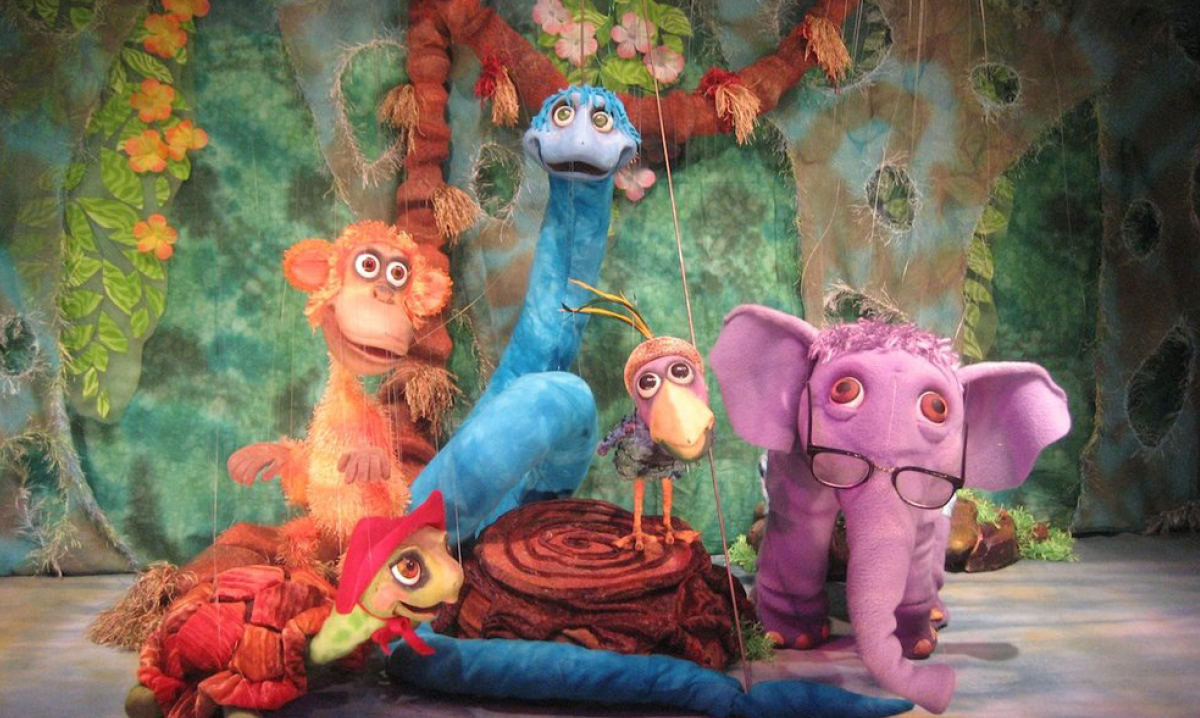 The monkey leaps. A dazzling creature flaps its wings. The slumbering princess’ eyelids blink open. These scenes unfurl on a tiny stage. And, in productions by the PuppetART Detroit Puppet Theater, the stars move with the help of strings, rods and hands.

Since 1990, PuppetART’s small-scale brand of storytelling has been delighting families all over southeast Michigan. Its repertoire of 10 original shows – including favorites Banana for Turtle, Sleeping Beauty, Firebird, The Snow Queen and Kolobok – now tour around town.

“Puppetry speaks fairy easily to children,” he says. “And adults, they somehow get captivated by this ‘children’s’ performance.” It’s pretty simple, as Gozman sees it. “The ability to animate an object as a live character: It belongs to the human race. Something resonates in us.”

Fortunately, he adds, eyes sparkling a bit, some grown-ups never outgrow it. Which is what makes experiencing a live PuppetART show – or visiting the troupe’s museum and studio in Southfield – so welcoming and magical.

These days, families can see PuppetART’s shows on select dates at venues like Music Hall for the Performing Arts in Detroit and the International Institute of Metropolitan Detroit.

Until 2017, PuppetART called Detroit’s downtown theater district home. The organization then moved to its Southfield home base and took its magic on the road, touring with both open-to-the-public shows and special engagements for schools and community centers.

“After all,” Gozman says, “PuppetART from the beginning was designed to serve metro Detroit.”

Tickets for public shows are $10 for children and $15 for adults. Check ahead for performance times, which may vary by venue.

Occasionally, PuppetART also hosts special performances – such as a 16 mm film series – at its Southfield location for a small audience of about 20 people. Reservations are a must and donations are welcome.

Not your typical museum

The Southfield space also houses PuppetART’s museum, which opened for visitors in early 2018. This cozy space is brimming with unique puppets from around the globe.

Inside glass cases, reserved for the “veterans,” are a pair of ornate Chinese marionette men, made circa 1900, and local legend “Applesauce,” a red dragon puppet who starred in Milky’s Movie Party, the popular 1950s Detroit-aired kids’ TV program.

The more modern puppets hang out in the open – from West African varieties carved of wood, to a giant dragon that’s worn costume-style. There’s also a newer collection of European puppets on display.

Standard hours are noon-3 p.m. Wednesdays and Saturdays, though Gozman notes it’s also possible to schedule a visit on other days with a prior reservation. Staff may even trot out a new friend for kids to meet in person!

Delivering a bright, bold mix of diversity is part of PuppetART’s mission. And culture, in particular, also plays out on stage. For instance, Turtle Island is inspired by Native American legends. Several shows have been influenced by Russian lore, too – a nod to Gozman’s heritage (he and the troupe’s two co-founders are all masters who trained in the former Soviet Union).

“Puppetry is a special art form,” Gozman says. “It’s like a crossroad of all arts.” That’s why, just before the curtain lifts, he chats a bit about the show’s roots – and what kids can watch for. Take Sleeping Beauty. The marionette tale was told almost entirely without words. How? Through dance.

There’s also the dialogue and music, all created in-house and, thanks to pre-recordings and sound system, crisply audible – even if little attendees get chatty. And naturally, the visuals are works of art, from the nearly lifelike 3D characters to the intricately detailed backdrops and intricate little props.

Twists are a specialty, too: The Crane Maiden includes live actors, and Oh, Ananse!, a West African tale appearing in February, has a hip-hop beat.

Even if you’ve seen a particular show before, expect surprises the next time, says Jaclyn Strez, a PuppetART alum, Dearborn native and current movie actress.

“(They’ll) try new things; add new things,” she says. “(They) don’t just ‘redo.’ It’s never the same show next year.” Since the stories are designed to be “age-old,” she adds, families often opt for season passes.

At an hour in length, shows are just the right length for kids, too.

PuppetART also continues its tradition of kid-friendly DIY workshops. Now held at the Southfield location during the noon-3 p.m. Wednesday and Saturday open hours, kids create their own puppets with the help of puppet designer Irina Baranovskaya.

These projects cost just $8 and take about 45 minutes to an hour to complete. Reservations are required.

Rather take home a pre-made character? Visit the little gift shop are. Varieties range from quirky $1 finger puppets to high-quality creations by Baranovskaya herself.

But whatever you do, says co-director Luda Mikheyenko, make plans to visit PuppetART.

“It doesn’t work until people come here,” she says. “Almost every time, people say, ‘I never expected to see what I saw.'”

The PuppetART Detroit Puppet Theater museum and studio is located at 24293 Telegraph Road, Suite 150 in Southfield. Visit the PuppetART website for more information, or call 313-961-7777.

Photo of A Banana for Turtle from the PuppetART Facebook page