Go Comedy! Improv Theater troupe is back with this musical, good for older teens or a parent date night, Feb. 19-March 6, 2016. 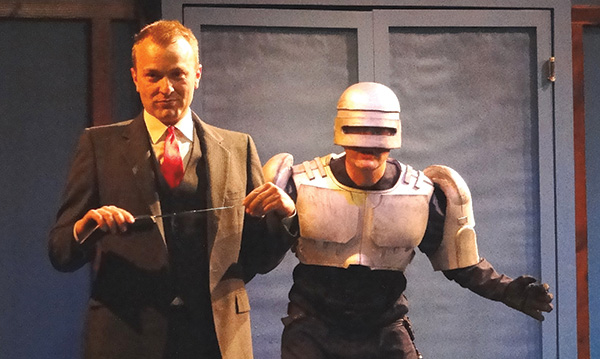 Are you a parent of gadget-driven teen who has a fascination with robots? Or maybe your teen saw and loved the 2014 remake of the classic film RoboCop? Well, bring him or her to the City Theatre, Detroit from Feb. 19 until March 6, 2016 to witness a live musical featuring a walking, talking and singing robot! That’s right: ROBOCOP! The Musical is back at this southeast Michigan theater!

The show, which debuted at Go Comedy! in 2010 and was originally titled RoGoCop! The Musical, returned to the stage thanks to a fundraising campaign by Go! Comedy and nonprofit organization GrooveBox Studios. Together, they were able to raise $6,000 in a Kickstarter.com to make this Detroit play a reality yet again.

Now, in 2016, it’s back – and it’s the perfect opportunity to take your older teen to a show or pop out for a date night at the theater. A remake of the iconic film RoboCop, this musical is about a robotic police officer whose sole purpose is to fight crime in Detroit. Teens will enjoy the local and light production that’s totally action-packed. Plus, they’ll hear and sway to the beat of some local, original songs such as “Armchair Nightmare” and “I Don’t Know (How to Love a Robot).”

For more information on the 2016 performance of ROBOCOP! The Musical, visit the Metro Parent calendar listing.

This post was originally published in 2015 and has been updated for 2016 by Megan Krueger.

Hanukkah celebrations are going to look different this year as families stay home and safe, but you can still make the most of it with the crafts, recipes and events in our at-home Hanukkah Guide.
Read more
Healing Haven