Shrek the Musical at Fisher Theatre in Detroit 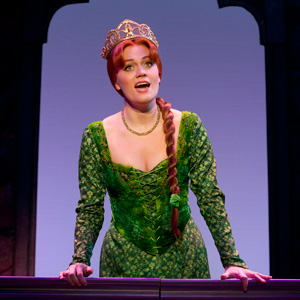 Heroes come in all sorts of packages. Big, tall, short and small. Sometimes, they're even green. And even ogres. Who – sing? In that case, we'd be talking about none other than (you guessed it!) Shrek the Musical, making its Detroit debut Feb. 28-March 12, 2012.

This Broadway hit is heading to the Fisher Theatre for an action-packed family stage delight. Like most fairytales, the story takes place in a kingdom far away. Our hero, Shrek, is on a quest to rescue a feisty princess in exchange for a deed to his swamp home. Shrek and the princess fall in love – but getting there is all the fun.

Parents and kids who know the story will delight that chatterbox Donkey is on stage as Shrek's sidekick. Toss in a villain with a "short" temper, a cookie with an attitude and oodles of other far-fetched misfits, and, producer Nederlander Detroit promises, "You've got the kind of mess that calls for a real hero." With its 19 fresh tunes, this musical delivers!

The stage show, featuring jaw-dropping scenery and dancing sure to dazzle, promises the irreverent humor everyone loves from the DreamWorks film – with feel-good ditties to spare. Note that while it's family show, kids 5 and younger are not allowed. Ticket prices range $29-$99.

Check out the Metro Parent listing for specific show times – including a special signed performance on Sunday, March 4 – on Shrek the Musical in Detroit.