Toys, bedding and other select products will no longer be listed as 'boy' or 'girl' items. Do you agree with the change? 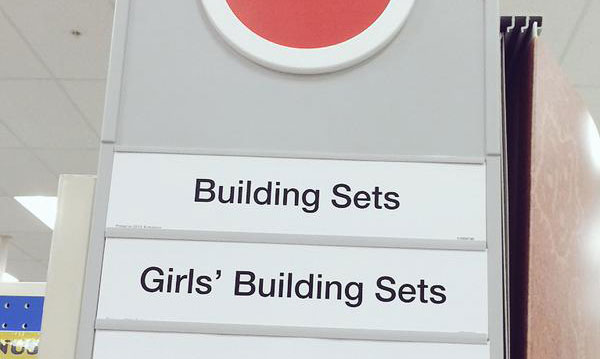 Target recently announced that it will start phasing out gender-based signs for certain children’s items in its stores.

The changes, which will take place over the next few months, will apply to children’s items in departments like toys, home and entertainment. Children’s clothing, the baby department and other areas of the store will still have gender-based signage.

The announcement was posted to Target’s website on Aug. 7.

Target says in its statement that while signs and displays are put in place to help guests find items efficiently, the store never wants guests “to feel frustrated or limited by the way things are presented.”

“Over the past year, guests have raised important questions about a handful of signs in our stores that offer product suggestions based on gender,” the announcement reads. “In some cases, like apparel, where there are fit and sizing differences, it makes sense. In others, it may not.”

The company agreed that in some departments, suggesting items based on gender is unnecessary.

“We heard you, and we agree. Right now, our teams are working across the store to identify areas where we can phase out gender-based signage to help strike a better balance,” the announcement continued. “For example, in the kids’ Bedding area, signs will no longer feature suggestions for boys or girls, just kids. In the Toys aisles, we’ll also remove reference to gender, including the use of pink, blue, yellow or green paper on the back walls of our shelves.”

The news is getting mixed reactions from shoppers. The store’s online announcement has more than 1,200 comments and the company’s Facebook page is getting new posts by the minute.

“I am completely annoyed that you are changing your signage in your toy aisles. Why would you allow society to dictate the layout of your stores?” Diane Chiaravalloti wrote on Target’s Facebook page. “My children like going down the girl aisle, my boys like going down the boy aisle. They feel like part of the store belongs to them.”

But others say it’s a step in the right direction.

“Way to go, Target, for being a leader in encouraging children that a boy can be a stay at home dad, a chef, or any number of ‘girl’ things while a girl can be a firefighter, carpenter, or scientist,” Christine Bondi posted to the page. “Toys are toys. And it’s about time that we got to see corporations with the financing and following to make real impact in the world of toys.”

What do you think about Target’s decision to phase out gender-based signs? Tell us in the comments below.