This Rochester dad of three makes the state's underground gems shine on his cool PBS TV program, 'Under the Radar Michigan.' 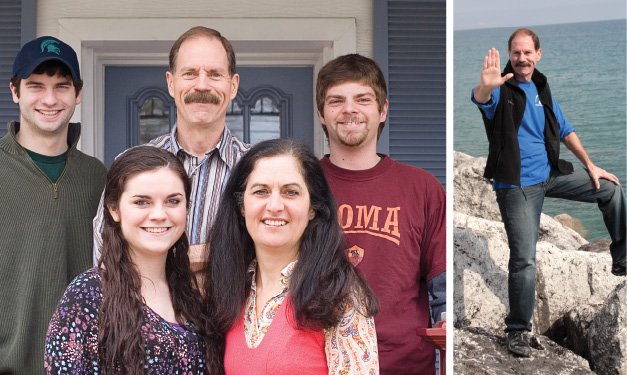 Dressing like a Hamtramck hipster. Camping by a fairy door in Ann Arbor. Getting the mayor of Tip-Up Town to sing, “Take Me to Shantytown.”

They’re not antics your typical unemployed 56-year-old guy pulls to “reinvent” himself. With a big TV audience tuning in.

But as host of Under the Radar Michigan – which airs on PBS all across Michigan and parts of Canada, Ohio and Wisconsin – Tom Daldin’s done it all. With a big mustachioed grin.

“I’m a knucklehead by nature,” quips the Rochester father of three. His goofy, go-anywhere, try-anything attitude’s built buzz for the show, which roots-out cool finds and folks in two Mitten cities per half-hour episode.

His philosophy? “High-energy, fast-paced, good humor.” It’s the same way he’s raised his kids, now ages 17-25. And it seems UTRM, which kicks off its second season around late August/early September 2011, is hitting home.

“I’m stopped on the street constantly,” Daldin says. “The first thing they say is, ‘Thank you.’ It’s not like, ‘Hey, dude, saw your show – get a hairpiece!’

Daldin’s dauntless love for his native state is doing just that.

“This is one of the greatest places you can live,” he says. “Our natural resources are incredible. You’re not going to find more sincere, genuinely creative, hardworking, dedicated people than here.”

And he’s looked. In his last gig, Daldin globetrotted, making high-end auto commercials. “New Ford crashing through the snow, riding on the beach,” that ilk. That is, till the market tanked, wiping out 80 percent of his income.

Initially, Daldin admits, he sat out a year. Then reality hit. “I’m like, what am I going to do? I’ve got a bunch of kids. I’m a middle-aged guy.”

Fortunately, he had some history, a buddy – and a knack for luck.

See, years ago, Daldin had another PBS show: Bob’s Jobs, a series that taught kids about careers and “what it’s really like to be a grownup.” It won awards. An upstart national kids’ network wanted it for a flagship program. Fired up, Daldin quit his full-time job in radio promos.

And – ? “The whole network folded!” Yep. He’s been here. But this is a fella who, just last winter, got hit by a speeding car, went airborne and survived without a single broken bone. “I bounce pretty good!” he says.

This time, pal Jim Edelman, a laid-off sales guy, was in the same boat. Their plan was simple: Tom’d be “the funny,” Jim’d be “the money.” The pair pitched PBS on an all-Michigan Travel Channel-style program, whipping up a five-minute pilot. “They flipped over it,” Daldin says.

It clicked. As he puts it, Michigan programs traditionally focus on “shooting something in the woods, pan-frying perch or painting light houses.”

That didn’t speak to his family. He and wife Cathy, a travel agent, loved taking the kids up north up to canoe, hit the sand dunes and chow pie at the Cherry Hut in Benzonia. “There’s a million people in Michigan who hunt. There’s also 9 million of us who don’t,” he says.

“We wanted to have a discovery program.”

They hunt for hidden jewels all over, from Under the Radar Michigan Facebook fans to checking-in with chambers of commerce. He’s found the B.O.B. in Grand Rapids. A free drive-through industrial scrap-yard art exhibit in Marquette. And the world’s best sliders – which, he says, are at Joe’s Hamburgers in Wyandotte.

In fact, downriver was one of his biggest surprises. “I thought Monroe was a strip mall and a couple factories. I was blown away by the culture!” He’s also a big fan of the “Hamtramck Disneyland” backyard kitsch collection. And he’ll rave to any parent about Binder Park Zoo in Battle Creek.

“I try to balance a cool, hip restaurant or bar with family stuff,” says Daldin, who hits about four attractions per town. “I’m a family guy to my core.”

That’s part of his drive: Inspiring kids like his to stick around. His 21-year-old is now looking to use his Michigan State degree in-state here, Daldin says. Youngest Andrea is eyeing a Peace Corps stint while, for now, oldest Jeff is “my rock star,” Daldin says, traveling with a band. (A chip off the old block: Dad once played with rock ‘n soul group Domino, and these days, you can still catch him drumming and covering tunes with local fave Free Beer.)

Critics have taken notice, too. Just last month, UTRM snagged an Emmy for “best program.” During the ceremony, Dadlin’s kids texted him like crazy.

“It was very cool: When we got home about 1 a.m., they were all waiting at the door to tell me how proud of me they were,” he says. “What a role reversal.”

Where to next? Expect to visit beach towns along Lake Michigan, Daldin says, and loads of family lures. Someday, there may even be an Under the Radar Great Lakes, covering all the states the touch H.O.M.E.S.