Kick that summer boredom and skip on over to downtown's newest family friendly addition: the ultimate playground, designed by children! 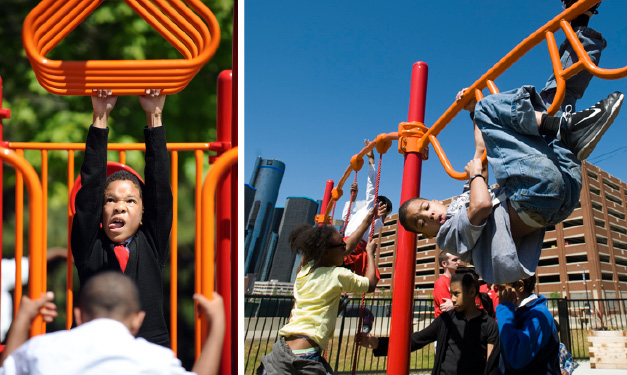 When it comes to playgrounds, kids know what they want. Colorful monkey bars and lots of spiraling slides? A must. Mini climbing wall? Check.

And in May of 2012, dozens of eager, smiling faces stood behind their ceremonial paper chain, scissors in hand, ready to cut their way through to the playground they had once only imagined.

The blueprints for this ultimate play space began with the imaginations of students from Friends School in Detroit. These creative minds, along with more young innovators from the neighborhoods of Lafayette Park, Indian Village, Sherwood Forest – plus the nearby suburban cities of Grosse Pointe, Livonia and Plymouth – were all participants in a “design day” event last fall.

Their paper creations were then interpreted by a handful of community and civic leaders and, with the generosity of The Kresge Foundation, Bank of America, KaBOOM – a national nonprofit organization dedicated to creating community playgrounds – and over a hundred local volunteers, this 2,500-square-foot playpark finally sprang to life.

The new riverfront recreation is not only great for families and their little ones, but it’s also a boost for the city’s downtown area.

“Detroit’s revitalized riverfront is pleased to add this new playpark to all of its current amenities,” said Faye Nelson, president and CEO of the Detroit RiverFront Conservancy. “We especially thank the state of Michigan for all the help in bringing this addition to downtown Detroit.”

Filled with colorful high-flying swing sets, bridges and bright orange bars that even the most adventurous climbers won’t get bored exploring – plus all sorts of other hidden play structures and gadgets – a visit to this play space wonderland will have youngsters pleading “just five more minutes, Mom!”