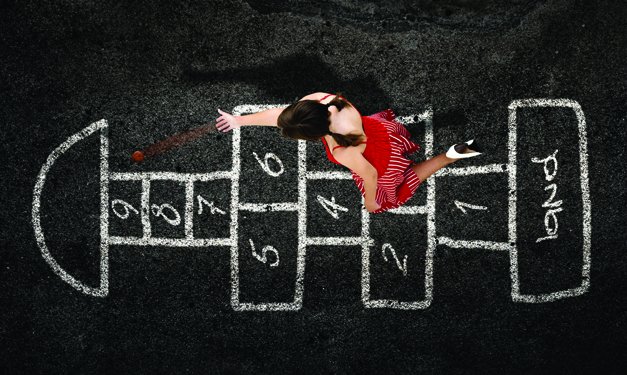 Everyone over 30 has some version of this childhood memory: You’re out playing with the neighborhood kids – kickball, stickball, tag or similar sidewalk games – and evening is coming on. You’ve been outside all summer day. It’s getting dark. The porch lights come on, the mosquitoes come out, but you are too absorbed in your play to go inside. But then you hear your mother calling you in for dinner. “Aw mom, five more minutes!” you beg.

You may not have realized it at the time, but when you played hopscotch, jump rope or dodge ball on the school yard, driveway or sidewalk, you were taking part in a children’s culture that had been passed on from kid to kid for generations.

But age-old pastimes like tag and jump rope are now on childhood’s endangered species list, being driven out by television, video games, and Wii. Help your child rediscover the active, old-fashioned fun of classic sidewalk games this summer. Here are a few simple games to get started with. Many more games and rules can be found online at Streetplay.com and GamesKidsPlay.net.

An ingeniously simple game that transforms two sidewalk squares into a miniature tennis court. (If you don’t have a sidewalk, just draw chalk squares in the driveway.) The sidewalk cracks define the court and net. Two players use open hands, handball-style, to bat a small rubber ball back and forth into each other’s squares. When one misses, the other scores a point. Players can negotiate details like how many points are needed to win, what the margin must be, and whether only the server can score.

Jumping rope is an inexpensive and highly efficient form of exercise for both children and adults. But it’s a lot more fun if you chant a traditional rhythmic jump rope rhyme as you pant and sweat! Remember “A my name is Alice, my husband’s name is Al, I live in Alabama and I bring back Apples”? You can find this and other jump rope rhymes at GamesKidsPlay.net.

According to StreetPlay.com, hopscotch began as a military training exercise in Britain during the Roman Empire, and the original hopscotch boards were 100 feet long. Now almost every country from the Netherlands to Vietnam has its own version of the game. To play, draw the board on the sidewalk with chalk, alternating double with single squares and giving each a number. Toss a pebble onto square one. Hop over square one and on through to the end. Turn around and hop back, pausing in square two to pick up your pebble. Keep going until you get to the end of the board.

A classic backyard game. One person is the “stop light,” and stands with her back to the other players, who line up at the other end of the yard. When she calls out “Green Light,” the others may move toward her. When she calls out “Red Light” and turns around, they have to freeze. If you’re caught moving, you’re out (for younger children, you can just have them go back to the starting line). The goal is to tag the stop light, and the strategy element is to avoid running so fast that you can’t stop when she turns around.

Scatter the jacks on the sidewalk or floor, toss the small rubber ball in the air, pick up the proper number of jacks (onesies, twosies, etc.) and catch the ball on the first bounce – all with the same hand. Keep going until you miss. Great for hand-eye coordination practice.

An exciting game that’s like tag and hide-and-seek combined. A can is placed in a central location to serve as base (sometimes called “jail”). Everyone except “It” hides. “It” doesn’t have to tag people. If he sees someone, he calls out her name (“I see Anna next to the garage!”) and she must come to base and stay there. The rest of the players must try to get to base and kick the can, which frees all the captives. If this happens, “It” must count to 100 while everyone hides again. The first one to be captured is “It” for the next game.

This article was originally published in July 2010.