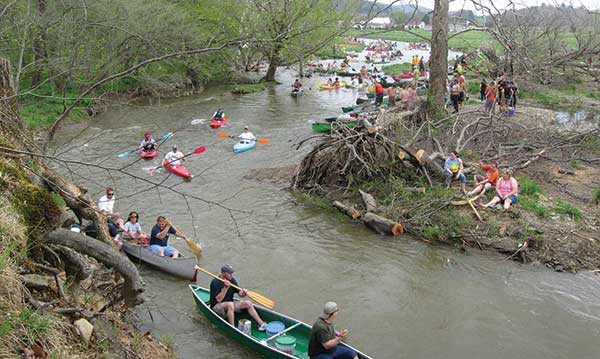 Perhaps a scene of early morning mist clinging to the pine trees along the mountains inspired someone to start calling the area “enchanted.” Then again, maybe the allure of year-round outdoor activities among the forested hills led folks to designate western New York’s Cattaraugus County the Enchanted Mountains. While the origin is unclear, there’s no doubt why it’s become prized for residents and visitors alike: There’s so much for families to do.

Located an hour south of Buffalo, Cattaraugus County is home to the Allegany State Park, which shares its borders with Pennsylvania’s Allegheny National Forest. As one of the largest state parks in New York, it stretches over 65,000 acres and is divided between the Red House Area in the north and the Quaker Area to the south. Take your pick of 18 paths; three are self-guided nature trails. Explore the museums open in either area. There’s a lake in each, too.

For the anglers in the group, fishing is a popular option. Don’t worry about bringing all your gear; you can rent poles and other fishing equipment nearby – but remember that you’ll need to purchase a New York fishing license.

Other not-to-miss activities here? Exploring the rock formations and the fire tower in the park’s northern corner. Visit the aptly named Thunder Rocks, too, which seem to lie in impossible stacks like a natural game of Jenga, and the eerie bear caves that might be a bit scary for those who are afraid of the dark.

Out on the water

While you can paddleboat and canoe in Allegany State Park, for some real thrills, try whitewater river rafting. Glaciers from long ago gouged and wore down rock paths through the Enchanted Mountains’ Zoar Valley, leaving river ways that are calm enough for beginners but include plenty of waves.

Spring whitewater rafting started in March with the peak waves hitting in April, leaving the water calmer for families looking to go through in May.

Stops along the way

To the west, New York’s Amish Trail is dotted with artisan shops and stores where you can get handcrafted items such as toys, rugs, candy and baked goods. You can find brochures in the city of Randolph that list stops along the way. Expect to see buggies as you go in this Old Order community, which is stricter than those of the Amish orders found in Lancaster, Pennsylvania.

Visit Seneca-Iroquois National Museum to learn more about Native American culture in the area ($5/adults, $2/ages 7-plus). For a one-of-a-kind experience, trek into the city of Olean (locals say O-lee-ann) and Rock City Park. Its 45-minute trail meanders through rock bridges, stairways made of stone and winding tunnels ($5/adults, $3/ages 6-12).

Cattaraugus County packs weekends throughout the year with festivals. The first weekend in May, join in the fun of the Great Valley Volunteer Fireman’s Regatta, which takes place along the Allegheny River. Now in its 40th year, around 1,200 entrants canoe and kayak to the cheers of crowds; crazy costumes are encouraged. On May 16, geocachers gather for the 10th annual Allegany State Park GeoBash. Part-treasure hunt, part-nature exploring, families follow coordinates to find hidden “treasure” boxes tucked under bushes and other spots. Inside, geocachers sign in to a logbook and swap out a trinket from the box (think small, inexpensive toys).

Start planning a trek to Enchanted Mountains in Cattaraugus County in New York at enchantedmountains.com.