I Love Flying with My Girls 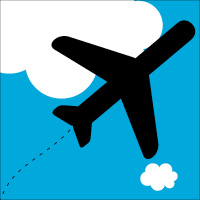 My girls fight like two raccoons in a pillowcase in private – whether it’s in the back seat of my car or at home. But get them in public and they’re just the sweetest little darlings you’ve ever seen.

When I first noticed this fact, my mother-in-law assured me it’s far better than the opposite. I have to agree. If they were little sweethearts at home and then fought like loons in public, I’d be very embarrassed. Better for the world to think they are perfection and never know about the ill wind that blows at home.

But it still amazes me.

The week before Christmas we flew to Arizona to see my husband’s family. While it was murder getting the girls to pack their rolling backpacks and get out of the house, I was so impressed by their behavior at the airport. They never complained about walking long distances while wheeling their backpacks behind them, waiting in annoyingly long lines or stuffing their shoes and coats in bins at the security checkpoint and then walking through the metal detectors in their stocking feet.

I guess the whole experience is so novel to them, they go through it all starry-eyed and interested. They’re so inspiringly well-behaved that my husband and I try to stay on our best behavior, too – though I’ve been known to gnash a tooth or two.

On the plane, this time around, the girls busied themselves with coloring books, free Internet on Dad’s laptop (special for the holidays, I guess) and a video tour of the fascinatingly small bathroom. There were also naps and a smidge of spilled Sprite (both coming and going!).

But the girls help me on another level, too. Because I have a secret. I hate to fly.

In spite of the fact that I’ve flown hundreds of thousands of miles in my day, because I used to live overseas, I have become a very nervous flyer. Take-offs, landings and all the turbulence in between turn my knuckles white and my palms all a-sweaty. But I have no choice. I can’t show my nerves – also known as my bald-faced fear – to my kids.

One time on a particularly bumpy descent into snowy Detroit, my daughter Patti beamed with enthusiasm, saying it was just like a rollercoaster ride. She eyed me quizzically for an extra second, having seen uncertainty in my face. I had no choice but to smile right back and pretend that I was enjoying it, too. I’ve even found that the more I fake it and refuse to give into my fear, for their sake, the less I really focus on being so nervous.

Isn’t that a great thing about kids? They really can bring out the best in us, even at 30,000 feet.