Kids and Map Reading: Why It’s Not a Lost Art

Despite growing up in the age of GPS, knowing how to read a map is still important for kids to learn. Find out why and get some ideas on how to help. 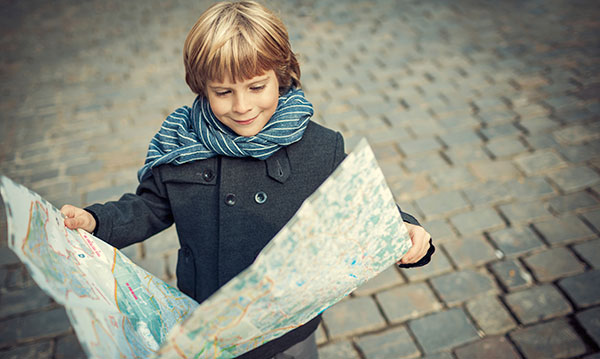 “Siri, get me directions to Disney World.”

A simple tap on your phone and a voice command like this is all the navigating effort most people need to put forth these days.

Whether you’re headed out on a long road trip or just driving a few towns over, pulling out a paper map isn’t usually part of the process. That’s a great thing, since GPS apps let drivers focus on the road while following spoken turn-by-turn instructions instead of fussing with folded maps.

But does that mean map reading is a lost art? Something our kids won’t need to worry about?

Absolutely not, sources say. Data networks aren’t always available, phones can lose battery and technology can fail, all leaving drivers with only the old-school methods of finding their way around.

“GPS is good but it’s not perfect,” says Gary Bubar, spokesperson for AAA Michigan. “If you’re dependent on MapQuest, what happens if you lose that technology? Then we’re back to where we were in 1995.”

It’s important to have another option, he says.

“Back-ups are a good thing. There are a lot of good reasons for people to have good map reading skills and that is part of it,” Bubar says.

Plus, map reading isn’t just about navigating on the road. Learning to read a map teaches kids about math, science, geography and more, Bubar says. Here are some ways that kids learn about map reading plus tips for getting your kids interested in the topic.

Learning to read a map starts early in the school setting, with kids as young as kindergartners making maps of their bedrooms or classrooms. By fifth grade, students at Norup International School in Oak Park work on making more detailed maps with grid lines, a compass and a key.

“They have to pretend like they came to a new land and they have to draw a map of it,” says Yasmin Ruple, a fifth grade teacher at the Berkley School District school.

Parents can find plenty of fun map-making activities to use at home, too. Consider this PBS Cat in the Hat mapping tool or try one of these map-making crafts.

Directions provided by Google Maps and other sites usually offer multiple routes to choose from, giving drivers the option to avoid highways or take a different route based on current traffic. Pick a time when you’re not in a rush and let your child get involved in the process, Ruple suggests.

“It always gives you the option of two or three routes. Have them pick which one they would choose,” she says.

Use your next family road trip as a chance to review maps in advance and help your kids get a visual sense for where they’re going, Bubar says. Then let your kids follow along with the map during the trip and teach them about mile markers, for example.

“What’s the one question children always ask?” Bubar says of the infamous “Are we there yet?” question. “If you know that you have to get off at Exit 310, we’re on northbound I-75 and we just passed mile marker 145, how far is it from 145 to 310? Let them do the math and that will tell them about how long.”

Kids then get to practice math skills, too.

“So if you take that number of miles and do the division into miles per hour, it lends itself to more than just the geography and the science that comes with that and moves over into math as well,” he says.

Families can stop by a full-service AAA center for maps and other planning help, Bubar says.

In Ruple’s fifth grade class, students are paired with a class somewhere across the country and given clues to use a map and find out where the “mystery” school is located.

“They had to study a map and decide what kind of questions they wanted to ask,” she says.

Students asked questions like, “Are you west of the Mississippi?” and used Google Earth and Google Maps to narrow down the possibilities, Ruple says.

Kids can use technology to further develop their skills by following along with directions on a parent’s phone or simply exploring maps and zooming in and out of locations. This helps with learning perspective, she says.

The newer technology, including Google Earth and Google Street View, can give kids a better picture of where they’re going in addition to the map skills they’re learning, Bubar says.

“The technology kind of does the work for you but it’s important to know how they arrive at the answers they arrive at,” he says. “You can learn a lot and figure out a lot with a compass and a map.”

Geocaching play involves searching for a hidden object using GPS coordinates posted online, and letterboxing is where you follow clues to find a hidden box with a rubber stamp and notebook inside. Both activities provide a great adventure that the whole family can take part in – all while practicing some aspects of map reading.