Niagara Falls for the Holidays 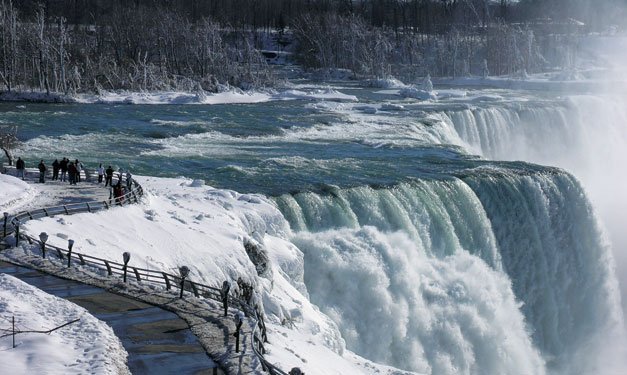 With snow blanketing the shoreline right up to the thundering water, Niagara Falls takes on a whole different look and feel during the holidays. The snow and ice create a wintery scene that seems pulled right from a fairytale.

For a memorable winter weekend getaway, take a shortcut through Canada to find your way to Niagara Falls. With a cool new holiday market on the New York side – complete with outdoor vendors and indoor music events – there’s plenty to lure southeast Michigan families to this neck of the woods!

Getting to know the Falls

The formation of Niagara Falls dates back to the Ice Age: As the glaciers began to melt, they created various waterways, including the Great Lakes and the Niagara River. Over thousands of years, the land shifted and eroded to what is now present-day Niagara Falls, which includes three parts: the Bridal Veil Falls, the American Falls and the Horseshoe Falls.

The first two appear almost as one. But a small stretch of land, called Luna Island, separates the smaller, Bridal Veil from the larger American Falls. Although these waterfalls’ height is 176 feet, much of that is made of rocks, so what visitors see is a 70-foot drop.

Around 75,750 gallons of water rush over these falls every second. You can get great views by walking or driving over the American Bridge and onto Goat Island, which is home to Niagara Falls State Park, New York’s oldest state park dating back to 1885. By comparison, the longer, more powerful Horseshoe, or Canadian Falls, push 681,750 gallons of water over the 167-foot drop every second.

I kept getting turned around while exploring the area. Where you stay and travel on the American side of the Falls is actually north of Canada. To add to the confusion, at the Falls, water is working its way from four of the Great Lakes – Huron, Michigan and Superior, through Lake Erie traveling north (yes, north!) – to Lake Ontario and then eventually out to the ocean. For me, it seemed like the water was flowing backwards. But once you have a feel for how things are situated, your family can head out to have some fun.

New in 2011, the Niagara Falls, New York area holds one of the largest European-style holiday markets and festivals in the nation. Set to run annually from late November to early January, three blocks of town feature seasonal decorations, along with more than 50 vendors, artisans and food booths. It’s open daily, closing early Christmas Eve and altogether on Christmas Day.

As you travel the market, stop at the one of the largest Christmas trees in state for pictures – and then take a turn skating at the 5,000-square foot rink (for one hour of skating time, adults pay $6 and kids under 12 pay $4, which includes skate rentals). As part of the event, there are several concerts going on indoors at the Conference Center Niagara Falls, including Elisabeth von Trapp (yes, the same von Trapps from The Sound of Music), granddaughter of Captain and Maria von Trapp, singing holiday favorites.

And don’t forget that at dusk every night, the Falls will be decked out in color as 21 high-powered lights illuminate the rushing water!

You’ll can also rent snowshoes and cross-country skis to venture into Niagara Falls State Park. Horse-drawn sleigh rides will be available, too; in the past, sleighs haven’t been permitted, but during the market, your family will be able to huddle up for a ride through the park. (Look for information booths at the market for more details and pricing.)

You should also plan time to just walk around town, through the state park, and across American Bridge for spectacular views of the Falls. On your journey, you can see what happens to the Falls in the winter. The constant rush of the water keeps them from freezing over, while the wet mist lands and freezes on anything it touches – making unique ice formations on tree braches and even hand rails.

You might explain to your kids that the Falls have only frozen over entirely once – in 1848, when people could actually walk out onto the Falls. Today, ice bridges still form beneath the Falls, but usually not until later in the winter, like January.

While you could walk across the ice bridge, for safety reasons, people aren’t allowed to. Please note that during the winter months, icy areas are roped off and pathways are maintained to keep them slip-free for visitors.

When you’re ready to take a break from chilly temperatures outdoors, head inside to see special exhibits, including over 1,500 aquatic animals. Among the sea creatures, your kids might enjoy seeing the penguins or sharks having a meal!

And there’s a 100,000-gallon pool where you can watch sea lions having their training sessions. The Aquarium of Niagara is open year round, daily from 9 a.m. to 5 p.m. Adults pay $10, kids ages 3-12 pay $6, and tykes 3 and under are admitted free. See the Aquarium of Niagara website for specs, including feeding times.

Since December is off-season at Niagara Falls, you can find steep discounts on lodging. Expect to save 40 percent compared to peak times! Look at the “Reserve Now” box, on the left-hand side of the home page, for special lodging packages.