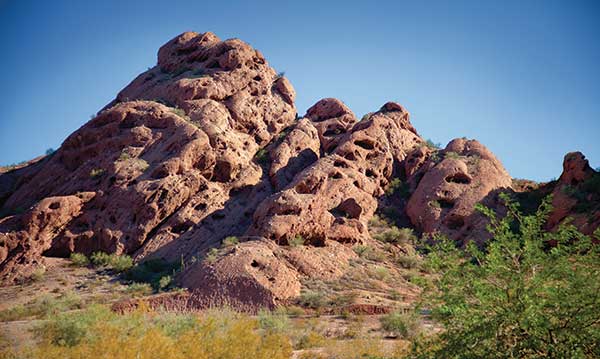 From cactus-speckled vistas to desert hills, Phoenix is a different world for Midwest kids accustomed to bushy trees and grassy lawns. The welcoming palm trees and radiant sunshine are hallmarks for the city known as The Valley of the Sun. For guaranteed sunshine without the desert’s blazing summer heat, try this southwest trip in spring.

Ten minutes east of downtown, Papago Park’s 1,200 acres stretch into neighboring Tempe and include some of the best spots for kids – all conveniently located in and around the park.
Begin at Desert Botanical Garden. It’s the only garden of its kind in the world dedicated to showing off strictly desert plants like cactus large and small, aloe, agave and more – all peppered with wildflower displays and a butterfly habitat (open through May). When you get your tickets, have kids ask for a Desert Detectives Bingo card to help lead the exploration (8 a.m.-8 p.m. daily; $22/adults, $12/ages 13-18, $10/3-12, free/under 3).

Next, head to the park’s nature trails. The flat, easy paths wend through red sandstone rock formations that jut out from the ground and look like they could be the backdrop for a movie set on Mars. Just off the main trail, take the Hole in the Rock Trail to see a massive rock formation you can walk through – and is prime for pictures (free, phoenix.gov).

For your last stop, check out the Phoenix Zoo, home to around 1,400 animals including Komodo dragons, lemurs and the occasional flamingo. Veer right almost in a U-turn after going through the main plaza to reach the children’s trail ($20/14-plus, $14/3-13, free/2 and under).

Get a hands-on education about Native Americans with a trip to the Heard Museum, where exhibits showcase art and other displays from the area’s tribal communities. Of note for kids is the collection of 437 Hopi kachina dolls. The Hopi people crafted them to teach their religious beliefs and they’re made to represent spirits ($18/13-plus, $7.50/6-12 and students, free/5 and under).

Take the lesson outside on a hike through the South Mountain Park and Preserve. Ask your kids to look closely for Indian petroglyphs on rock faces. The 16,000-acre park is one of the largest municipal parks in North America and a draw for outdoor enthusiasts (free; phoenix.gov).

If your kids’ feet get tired, don’t worry – you can always hop back in the car and drive to one of the park’s lookouts versus trekking to the summit.

April marks the official start to baseball season in Phoenix with the Arizona Diamondbacks opener on Monday April 6 against the San Francisco Giants. There are home games at Chase Field.

But if you’re before April 4, catch a spring training game, featuring the likes of the Cincinnati Reds, Cleveland Indians, Chicago White Sox and more (sadly no Detroit Tigers). Several teams practice here in the weeks leading up the Major League Baseball season. Catch unbeatable matchups in small stadiums for as little as $9 a ticket on the lawn. Learn more at cactusleague.com.