Traveling to the Upper Peninsula: Things to Do During Fall 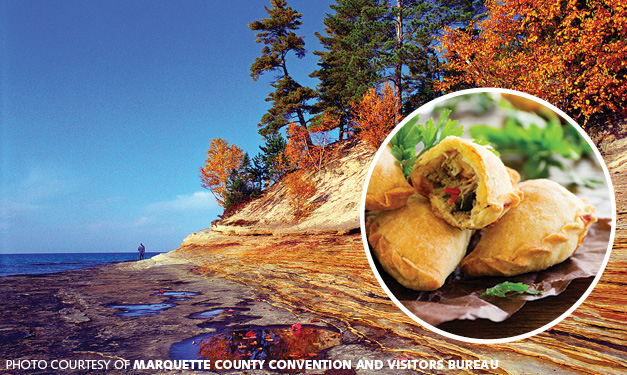 Bursts of red, orange and yellow on the cliff tops seem to trickle down the rock face and into the waves along the banks of Lake Superior. Welcome to fall in the Upper Peninsula! The month of October is peak leaf peeping time in the U.P. If you have one weekend to spare this month, venture above the bridge and up north into Yooper country.

Want to check out even more leaf trails to see the colors change? Peek at our roundup of autumn color tours in Detroit, Ann Arbor and other southeast Michigan spots – and beyond.

Just under three hours from the Mackinac Bridge, Marquette is the largest city in the U.P. – and the perfect home base for exploring. Founded in 1849, Marquette’s roots are in the discovery of iron ore, which is still an important industry here.

You can see the towering upper and lower iron ore docks from Presque Isle Park situated just north of Marquette. The 323-acre park sticks out into Lake Superior (Yoopers call it “the island”) and includes picnic tables, playgrounds and plenty of trails. The park has a rotating schedule for the main road – it’s closed at certain times of the day so walkers have plenty of room. See the website for specific times.

Before or after dinner, take a stroll along Marquette’s main streets and harbor path, maybe even out onto the break wall for the Upper Harbor Lighthouse – just make sure there are no big waves before you take the lighthouse path. Our suggestion is to make a stop in at Donckers on the town’s main street, Washington, for dessert – and even dinner. Donckers has been a Marquette landmark for over 100 years and serves some of the thickest, richest milkshakes around (chocolate fans should ask for the Zanzibar shake).

To help your kids understand more about the area’s history, head to the Michigan Iron Industry Museum 15 minutes west of Marquette in Negaunee. The free (donations appreciated) museum features displays covering iron heritage in the area, from its discovery in 1844 to today, including hands-on exhibits geared toward kids. You’ll also find two outdoor trails. At the museum front, go through the 1/3-mile Geology Trail and then take the 1/4-mile River Overlook Trail in back, which includes markers that have information tailored just for kids. Guests should plan to spend one to two hours touring the museum. While all exhibits are currently open, renovations are underway to upgrade existing exhibits.

One of best ways to check out the fall colors is from the water – there are only a handful of operators still running in October. The popular Pictured Rocks Cruises is a two-hour-and-40-minute long voyage, which takes passengers from Munising Bay (30 minutes southeast of Marquette) and along Pictured Rocks National Lakeshore. Your boat guide will point out the most famous of the shore’s structures including the Caves of all Colors, Miners Castle, Battleship Row and others. Part of the commentary details how the 42-mile coast became the first national lakeshore in the country and how the ground deposits work their way down the cliffs to make them colorful. Spray Falls cruises are available at 10 a.m., 1:30 p.m. and 5 p.m. through Oct. 23, 2016; costs are $40 for adults, $10 for children ages 6-12 and $1 for kids under 6.

To see Pictured Rocks from land, head east of Munising on Alger County Road H-58 to Miners Castle Road. The wind and water have eroded the cliff face so that it looks like a rocky palace perched at the water’s edge. From the parking lot, you can walk to one of three outlooks. With kids, you may want to keep to the upper overlooks, since the stairs are fairly steep to the lower overlook. All of the outlooks are stroller-friendly.

Six signs that you’re a Yooper

Folks in the Upper Peninsula are affectionately called Yoopers. U.P. natives will tell you you’re only a Yooper if you were born and raised in the area. But you can be one for the weekend by picking up some of these telltale signs you’re a Yooper.

You’re eating cudighi for dinner. Called Yooper sausage, it includes seasonings like allspice, cinnamon, cloves and fennel mixed in with ground pork. Usually served as some sort of sandwich.

You call Michiganders from outside the U.P. ‘trolls.’ People from the lower part of Michigan are often designated “trolls” since they live under the bridge – the Mackinac Bridge, that is.

You own at least one snowmobile. Yoopers don’t mind snow, so many take to the trails in snowmobiles once the flakes start falling.

You’ve seen the Northern Lights more than once. Aurora borealis makes a regular appearance in the U.P. Many Yoopers go to Presque Isle Park in the evening – more like early morning – for a light show.

You use the term ‘holy wha!’ Yoopers have a distinct way of talking that has hints of Canada and Minnesota mixed in. Eh?

You have late-night cravings for pasties. These small meat pies (almost like a cross between a pot pie and a calzone) were the traditional favorite of Cornish miners. Pasties are stuffed with ground beef, diced rutabaga, onions and carrots. Yoopers disagree about whether it’s best to eat them plain, with ketchup or with gravy.

This post was originally published in 2014 and has been updated for 2016 by Jessica Schrader.